On 20 June 2015 I completed my 9th Cherohala Challenge.  It’s become a tradition–my annual cycling Super Bowl, if you will.

The biggest issue going into this year’s edition was the weather.  When I checked the forecast at 4:something a.m., I saw that it called for  a 60% chance of rain, with a thunderstorm watch.  I’m no fan of cycling in the rain under the best of circumstances, and I certainly didn’t want to get caught in a thunderstorm in the mountains.  But as I embarked for Tellico Plains in the pre-dawn darkness, there was no way of knowing how the day would unfold.  I could luck out and stay mostly dry, or it could turn into a miserable wet day. 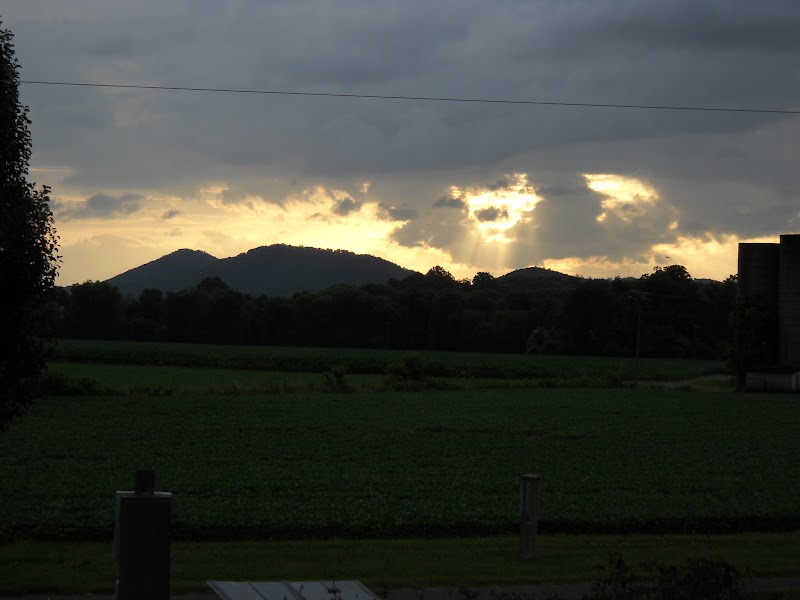 Registration check-in went smoothly.  The only issue was that we had to park in a field that’s farther away than the previous field.  This year there were nearly 400 riders, the most in over five years.  Due to the added walking time, I got rolling about five minutes after the mass start, when most of the century riders departed. 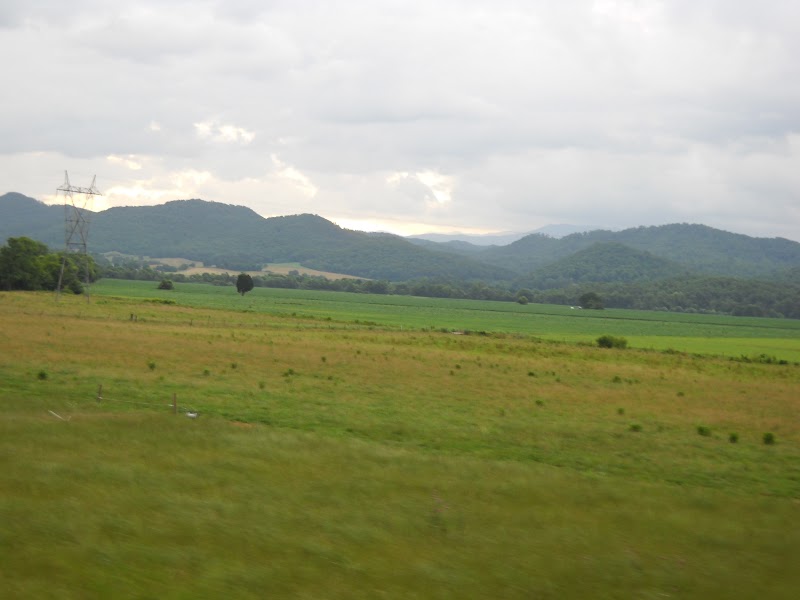 Two miles into the ride, looking back at the plains 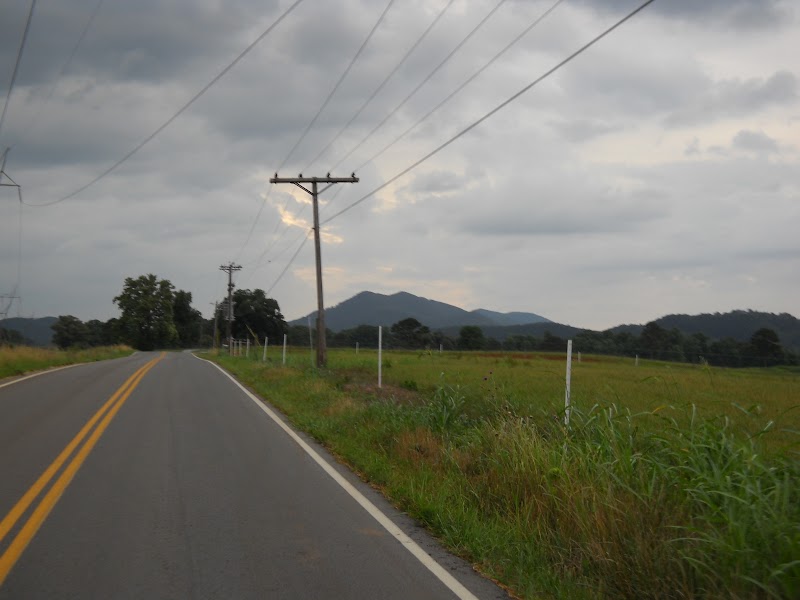 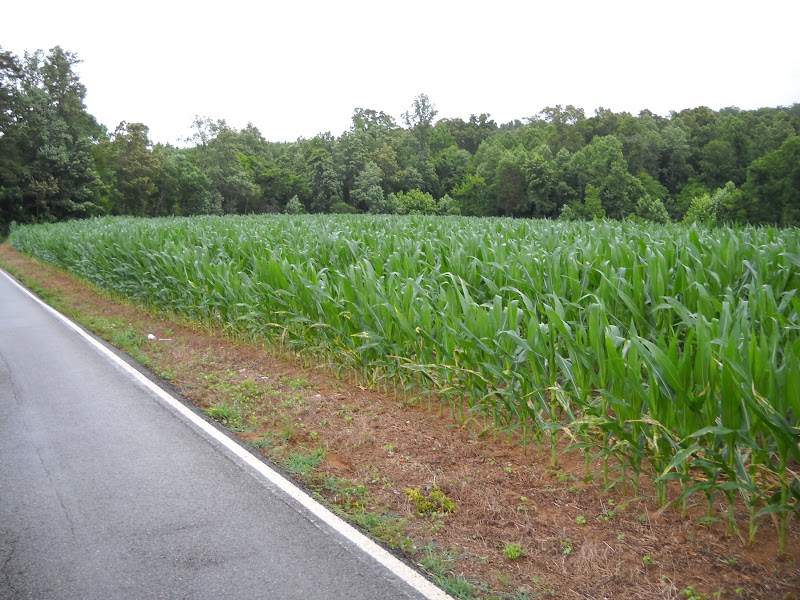 At some point during the Challenge I inevitably ask myself, “Why am I doing this?”  Usually the question pops up 70-80 miles into the ride, while toiling up the mountainside.  But on this day it came much earlier, when it started raining 30 minutes into the ride.  Not a good omen.  It wasn’t a hard rain, but enough of one for me to question my sanity and contemplate how miserable conditions would have to get for me to turn back.

Fortunately, it only rained for a few miles, rendering my doomsday scenario moot . . . for the time being.

I stopped at the first rest stop for water and the porta-pottie, then continued.  The next several miles went without incident. 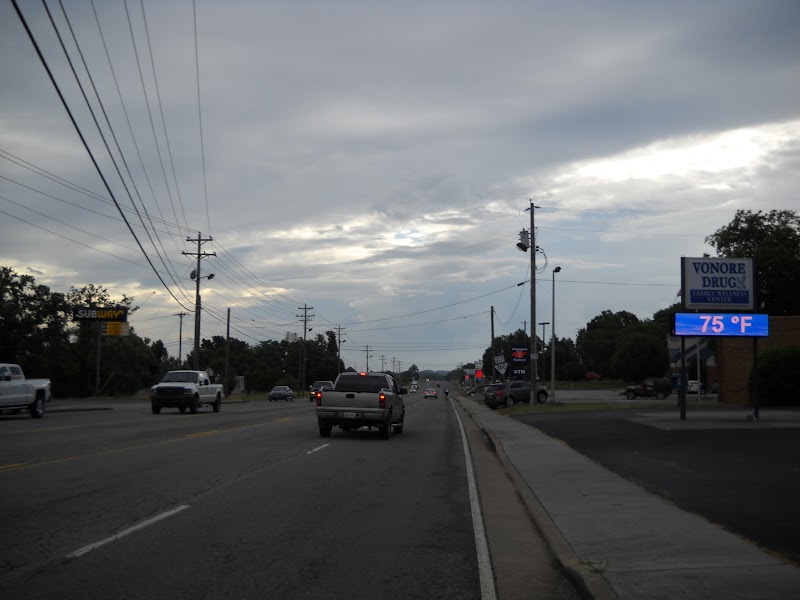 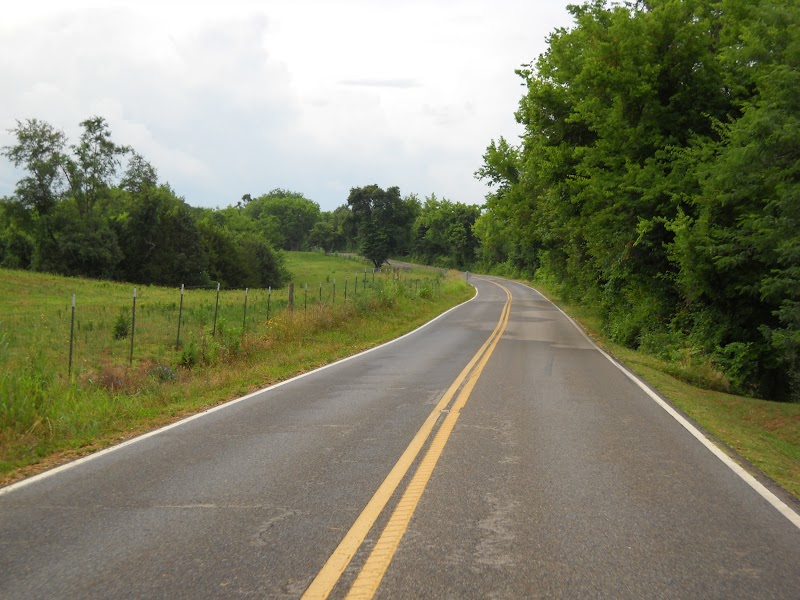 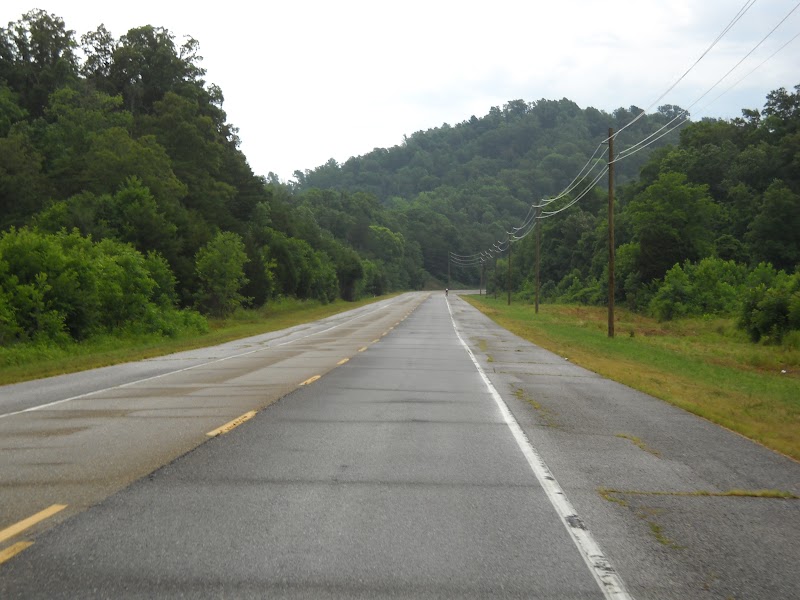 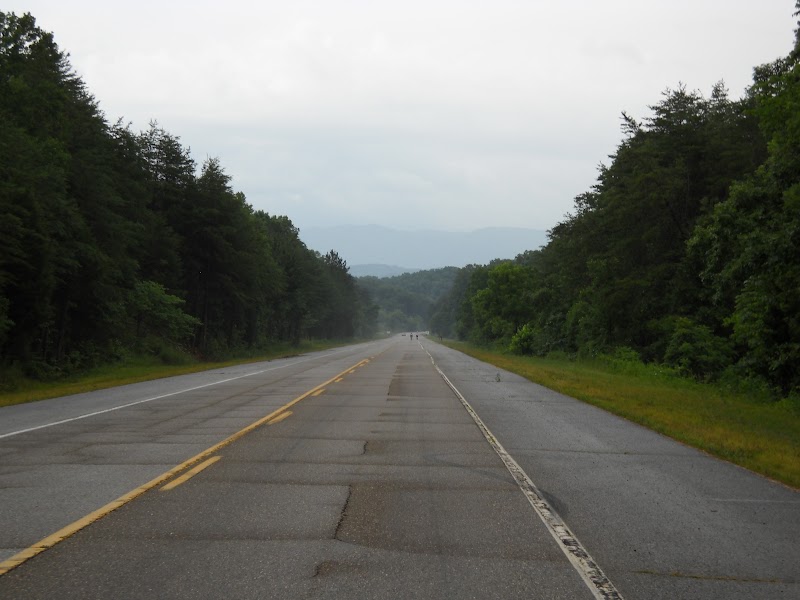 At this point my camera went kaput, and I couldn’t take pictures for the rest of the day.  You can see pictures from the last 70 miles in my 2014 report.  The scenery this year was mostly the same, only much cloudier and wetter.

I encountered another short rain shower on the Chilhowee Lake section of the route.  One positive aspect about the conditions was that there wasn’t much wind in the morning, which can be taxing along the water.

After that it was on through the famed Tail of the Dragon, with its 311 curves in 11 miles.  Professional photographers stationed along the road captured some action pictures. 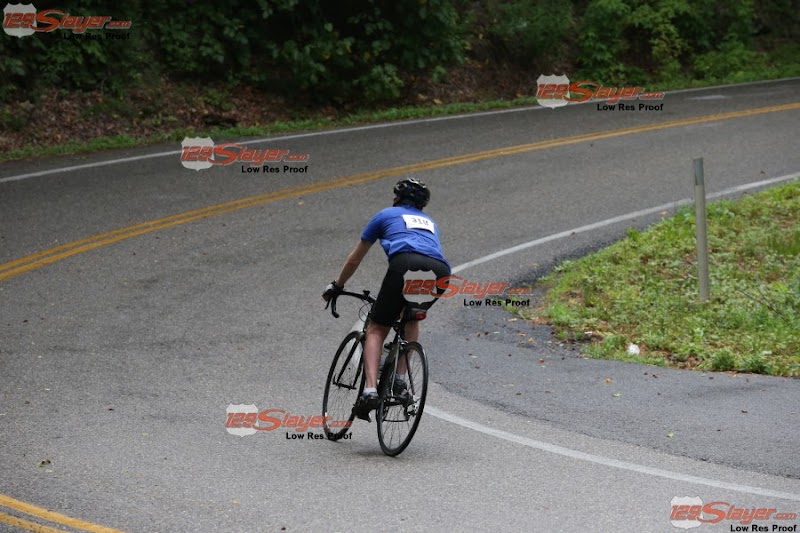 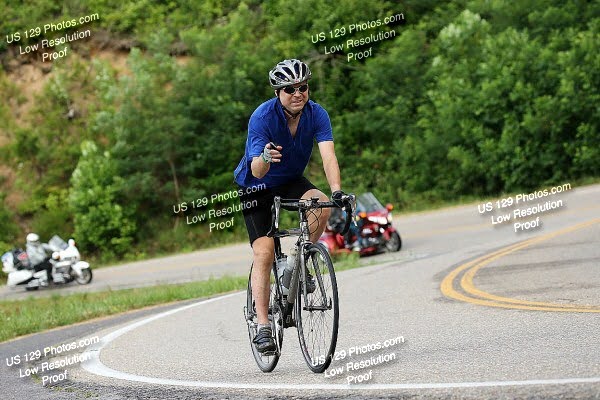 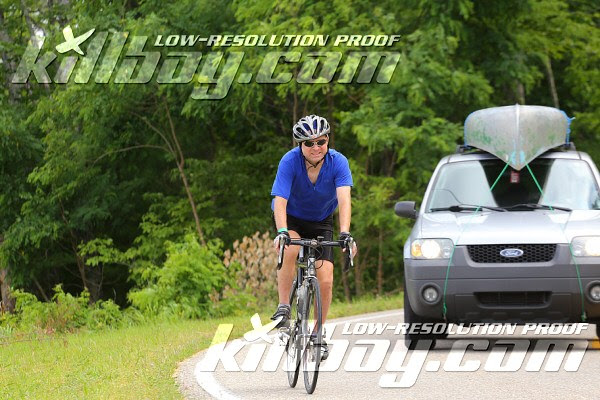 Traffic wasn’t too bad on the Dragon.  The dampness kept some people away.  A majority of the motorcycle traffic was of the Harley touring variety.  Most of them were courteous enough.  I didn’t get buzzed by many crotch rockets. 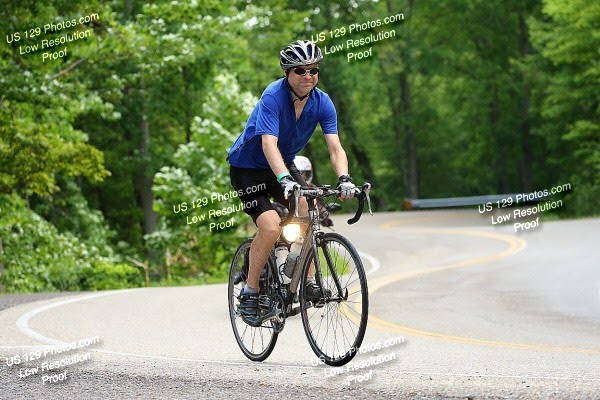 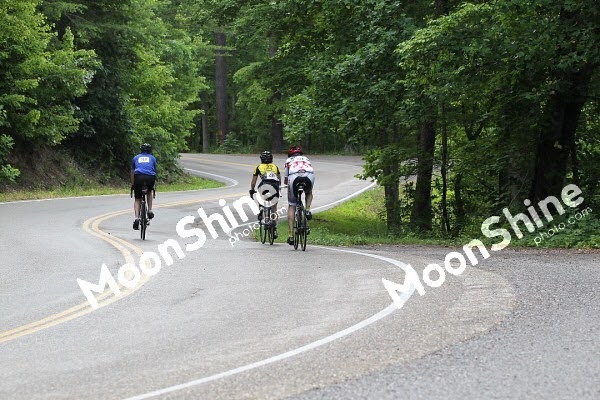 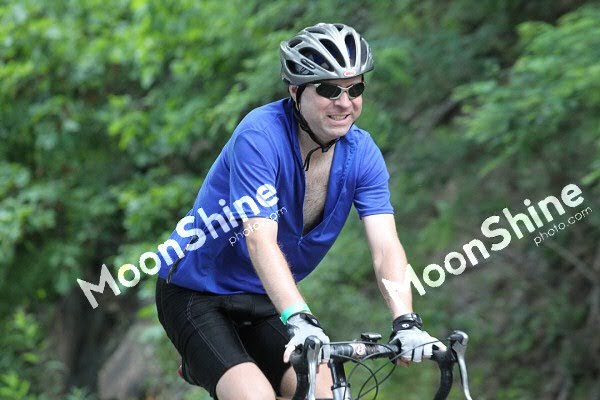 I stopped for lunch at the second rest stop, at the North Carolina border.  It had been 5+ hours since breakfast, and I was hungry.  So I ate a lot.  In addition to the usual assortment of junk/high-energy food, they had hot French toast.  I enjoyed the meal.

Thereafter I braked down the steep descent past Cheoah dam and then made the gradual climb through the Cheoah River gorge.  There’s little traffic on this road, and its remote setting–nestled along the river between ridges–lends itself to deep contemplation on life.  Or at least it does for me.

At the third rest stop I took stock of my physical condition in anticipation of the 12-mile mountain climb ahead.  I felt as good as could be expected, I just didn’t know what lay ahead on the Cherohala Skyway.  The sky was teasing us with a few breaks in the clouds.  So I applied sun screen, just in case.  But I knew that a thunderstorm could fire up at any point with little warning.

Onward through the woods bordering Lake Santeethlah on Joyce Kilmer Road.  Not only is this road secluded (just a handful of buildings and some camping spots) but it’s also rough.  Not a particularly enjoyable part of the ride, frankly.

But the scene quickly changes once you skirt the west end of the lake and turn onto Santeetlah Road.  You round a bend and suddenly it’s up, up, up the mountain on the unshaded roadway.

I climb relatively fast for my level of cycling.  Not that I climb fast, but compared to similar riders, it’s faster than my flat or downhill riding.  In short, most of the passing I do is going uphill.  Then the passees often catch back up either when I stop or on a downhill section.

Because of this I pass some riders 2-4 times.  One rider joked, “There goes 310 [my jersey number] again!” as I lumbered by.

A conundrum I encounter at rest stops: the toughest stretches are the ones immediately after I take a break.  My leg muscles tighten up when I stop, rather than rejuvenate.  It takes several minutes of pedaling to loosen them up again.  It makes me wonder if stopping is worth it.  But I have to stop, either for water/food, or to give my sit muscles/contact points a break. 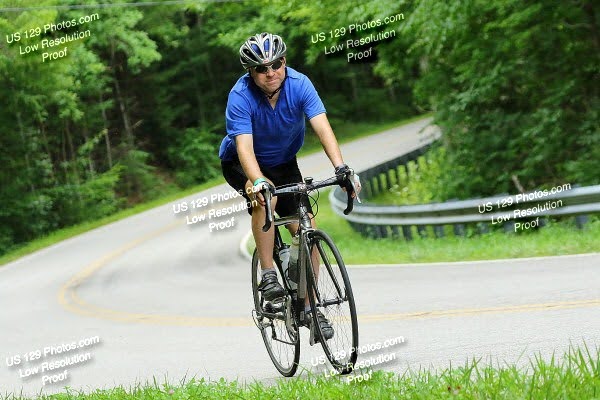 It takes a couple hours to ascend the Skyway climbing at 6-8 m.p.h.  And during that time the weather can change, sometimes dramatically.  I almost made it to the top dry.  But with two miles to go it started sprinkling, then raining (the third time of the day).  Not a downpour, but enough rain that it got sloppy and difficult to see when I accelerated to 15 m.p.h. on the flatter stretch near the top.

The rain tapered off as I recharged at the peak rest stop.  But the wind picked up and visibility declined as a cloud enveloped the mountaintop.  By the time I started rolling downhill it was down to ~100 feet.  The first couple miles I was riding the brakes much more than normal because you couldn’t see around the corners.  Thankfully, things cleared up quickly once I got out of the cloud, because that segment was slow and nerve wracking.

The atmosphere got brighter and warmer (by about 20 degrees) as I wound down through the range into Tennessee and finally back to Tellico Plains.  My bicycle computer blanked out shortly before I finished, so I don’t know exactly what my riding time was for the 113-mile course. I finished at 4:40 p.m.

For the first time (that I’ve done it) participants got medals. 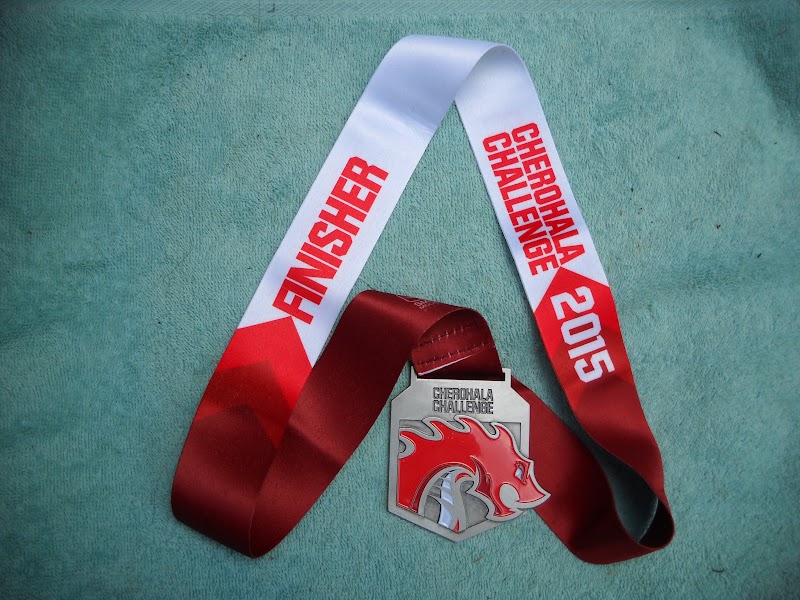 Everyone (who finishes) is a winner

Sadly, no podium girls awarded me the medal.  Just a middle-aged bald guy standing at the finish line.

All in all, it was another enjoyable cycling experience.  I would have preferred a warm, sunny day, but the rain showers were tolerable.  The event support and rest stops were good, as usual.  Given my health challenge the last two years (psoriatic arthritis), I’m thankful I can still tackle this demanding course.