Tuesday I loaded up my bicycle, drove down to Tellico Plains, TN, and did an out-and-back ride up to the high point on the Cherohala Skyway.
For those of you who aren’t familiar with it, the Skyway is

a 43-mile (69 km) National Scenic Byway that connects Tellico Plains, Tennessee, to Robbinsville, North Carolina in the southeastern United States. Its name is a portmanteau of Cherokee and Nantahala, the two national forests through which it passes.

It was a great afternoon to be outside: mostly sunny, light winds, temperatures (in the valley) in the mid-70s. I wasn’t the only person who opted to spend it in the mountains. Thanks to the leaf watchers, there was more traffic than I had ever seen on the Skyway before. And yet, in comparison to other mountain roads (namely, the Smoky Mountains) it was still light. Up top you could watch the road for a couple minutes and not see a vehicle drive by.
That’s one thing that makes the Skyway such a unique experience. Apart from the sparse traffic, the only evidence of civilization you see in 30+ miles are a couple outhouses and some picnic tables. If you’re riding solo, this complete immersion into the wilderness adds an even more epic dynamic to your conquest of the mountains. Although I enjoy the solitude, it would be nice if they had some water up there, though. Hauling your own adds extra weight.
Pictures: 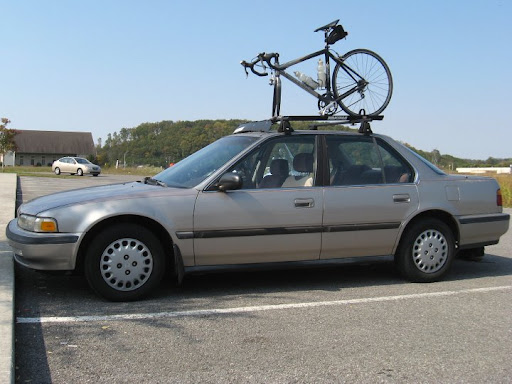 At the Tellico Plains Visitor’s Center, minutes before launch time 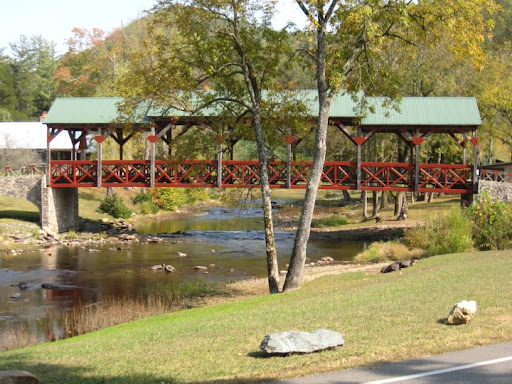 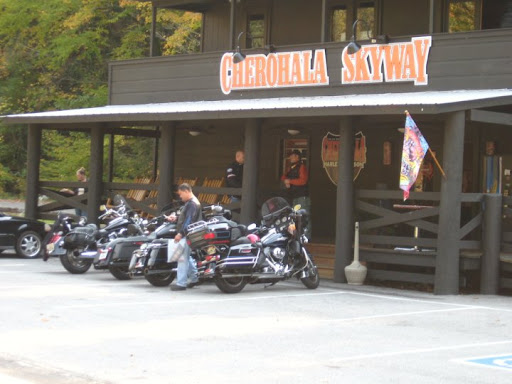 The Skyway is a popular motorcycle destination 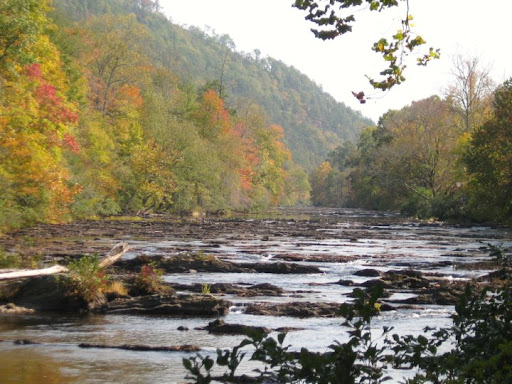 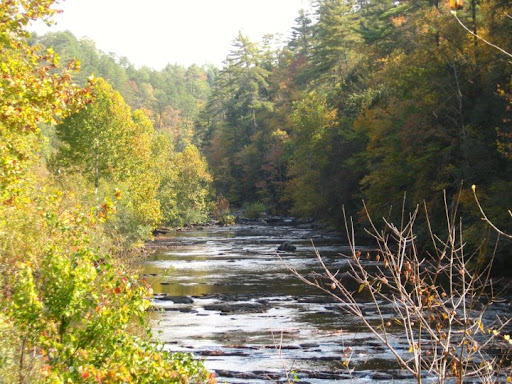 Further upstream. The Skyway follows the Tellico River for about five miles. 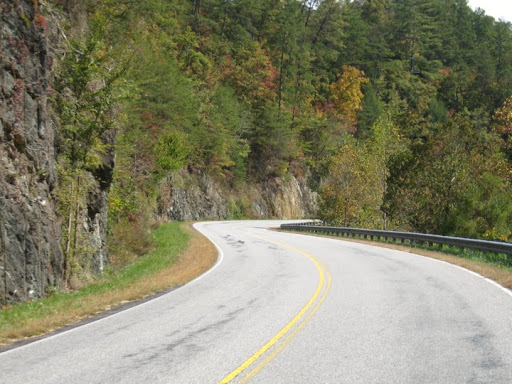 Winding along the Tellico River
I made the here trip for a couple reasons: (1) because I haven’t done a challenging climb all year, and (2) to see fall colors.
The Skyway was a good choice on both accounts. Although the foliage was past peak above 4,000 feet, there was still plenty of nice color between 2,500-4,500 feet. It was just peaking below 2,500 feet. I had never been on the Cherohala during the fall (only during the summer), so it was a new experience this time.
As for the climbing, it’s abundant. I estimate that 26 of the 31 miles to the top are uphill. The climbing ranges from an easy five-mile jaunt along the river (18 mph) to miles-long sections of 6-8%, even 9%. Plenty of slogging along at 7-8 mph. Lots of quality face time with the front wheel.
To me, the mental dynamic of a long climb becomes just as challenging as the physical demand. It starts getting in my head when I see nothing but more hill turn after turn after turn. I become psychologically fatigued thinking about the enormity of the mountain, rather than focusing on just reaching the next curve ahead.
There’s a life lesson there somewhere. 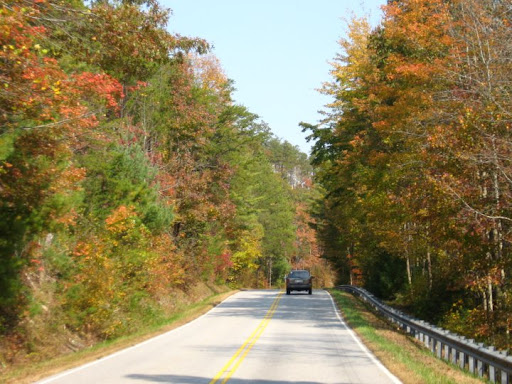 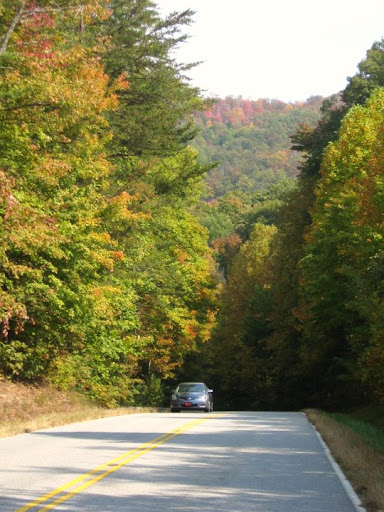 Virtually every grueling ride I do has a “Doubting Thomas” moment–a time, relatively early in the ordeal, where I question my sanity and ability to complete the mission. In short, I say to myself, “This is a bad idea. Why the hell am I doing this?”
This ride was no exception. About seven miles into the trek, before I had even reached the sustained torturous stretches, my bike started making funny noises. That was all it took to kick my worry motor into overdrive. What if I suffered a catastrophic mechanical or physical breakdown out in this remote country? That would suck. Wouldn’t it be much more sensible to turn back and do the easy road along the river instead?
Yes, that would have been the sane thing to do. Which is why I kept going. 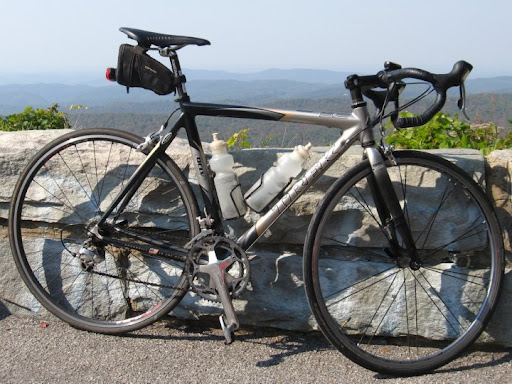 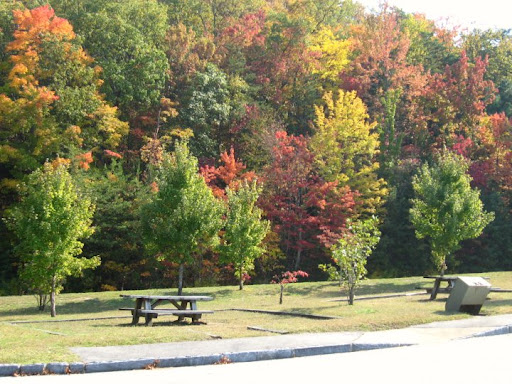 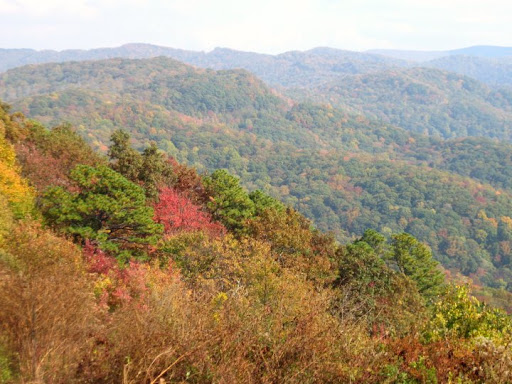 The reds were the best colors along the route. The yellows and oranges weren’t as brilliant. 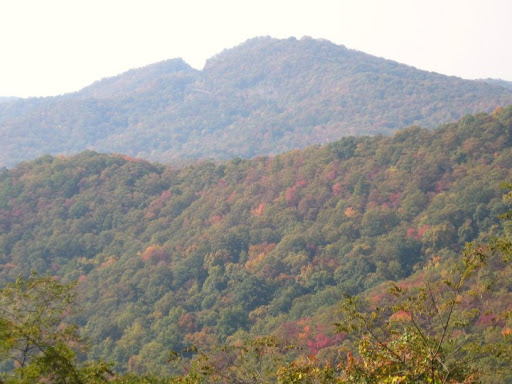 You can faintly see the road winding through the “V” in the mountain profile above. 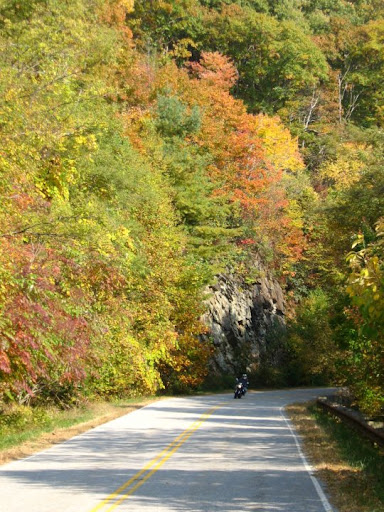 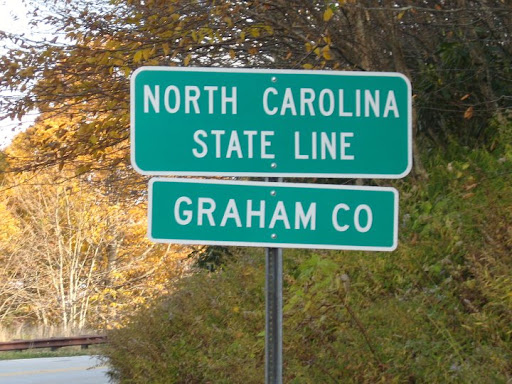 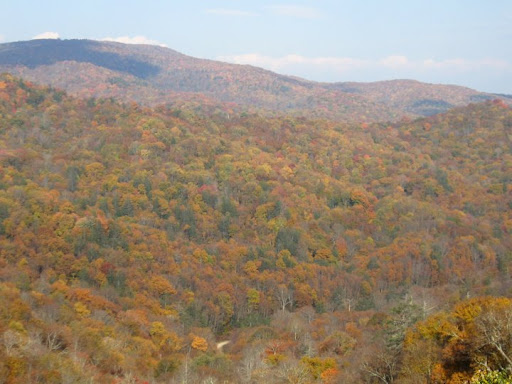 Colors were past peak color above 4,000 feet. Many of the leaves had already fallen. 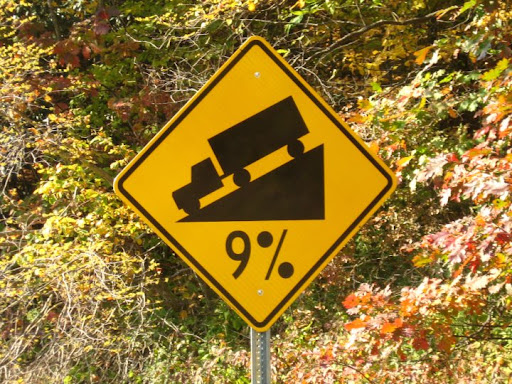 No rest for the weary on the mighty Cherohala Skyway. 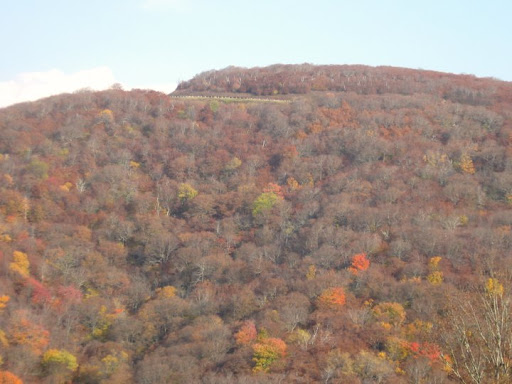 At last, the top of the Skyway is within sight (above). Note all the barren trees. 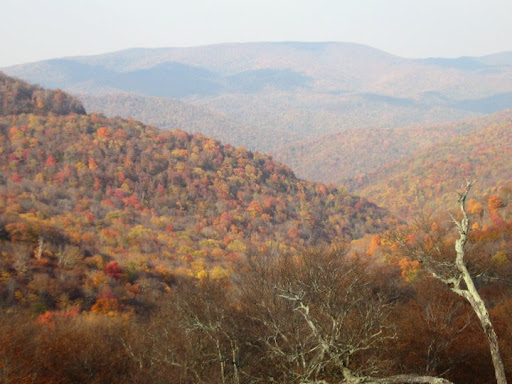 Near the top of Skyway. Curiously, the panorama from the highest overlook isn’t very good. There are much better views just to the east and west of it. 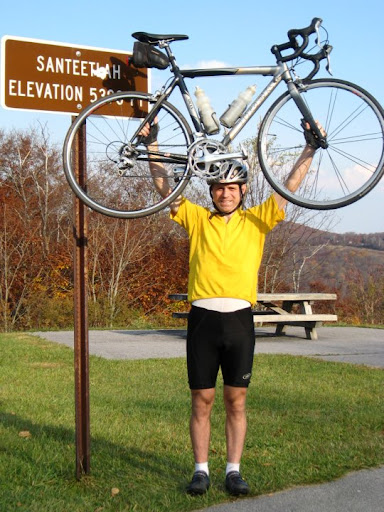 Skyway conquered! At Santeetlah Overlook, elevation 5,390 feet.
It was pleasant on the summit for October. The sun was still out and there was only a light breeze. I’ve felt colder up there in June.
I sat for several minutes listening to a motorcyclist loudly talking on his phone. I wanted to get someone to take a picture. A couple vehicles pulled over, but no one lingered long enough for me to approach them. Finally a nice lady from Florida emerged from a van and obliged. She took not one, but several. Holding your bike up by a sign isn’t the most natural of poses.
It’s a great feeling sitting on the summit. You quickly forget the sweat and pain it took to get there and bask in the air of your velo superiority. To borrow a movie phrase, you feel like king of the world, or at least king of that mountain. But then after a bit you turn around and head back down, making the whole exercise seem rather pointless. 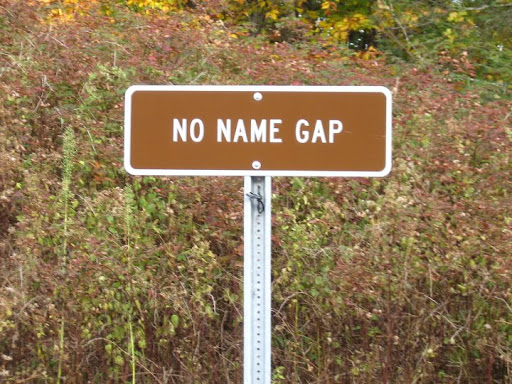 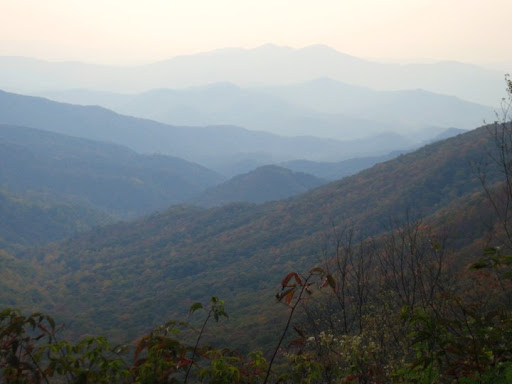 One last look at the ageless mountains.
I take a bizarre sense of pride in two otherwise trivial aspects of the ride. First, I never used the lowest two gears on the bike, even on the 9% grades. Some cyclists like to sit and spin; I like to stand and mash. It works for me. Besides, it’s reassuring to know that there’s an easier gear available if you need it.
Second, I consumed just over two bottles of water during the ride. No food. I did have emergency provisions (and warmer clothing) in a backpack–which, incidentally, was rather uncomfortable when I was sweating–but I didn’t need it. I only drank some of the extra water, the rest of the stuff I hauled for nothing. But better to be safe than sorry. If you bonk (low blood sugar) or get the chills miles from anywhere, you’ve got a big problem.
Fortunately, nothing went wrong. I didn’t cramp and my squeaky bike didn’t break down. I rolled back into Tellico Plains with amble daylight, a bit tired, but exhilarated from another velo mountaintop experience.
Ride stats
Distance: 62.5 miles
Time: 4:28