On 15 August 2015 I rode in the Blue Ridge Breakaway (BRB), which started at Lake Junaluska, NC.  It’s the first time I’ve done this event, which follows this route:

and has this elevation profile:

I arose super early and departed at 5:00 a.m. for Haywood County.  I should have left a bit earlier, because although parking and check-in went smoothly upon my arrival, I didn’t make it onto the road until a few minutes after the official 7:30 a.m. start. 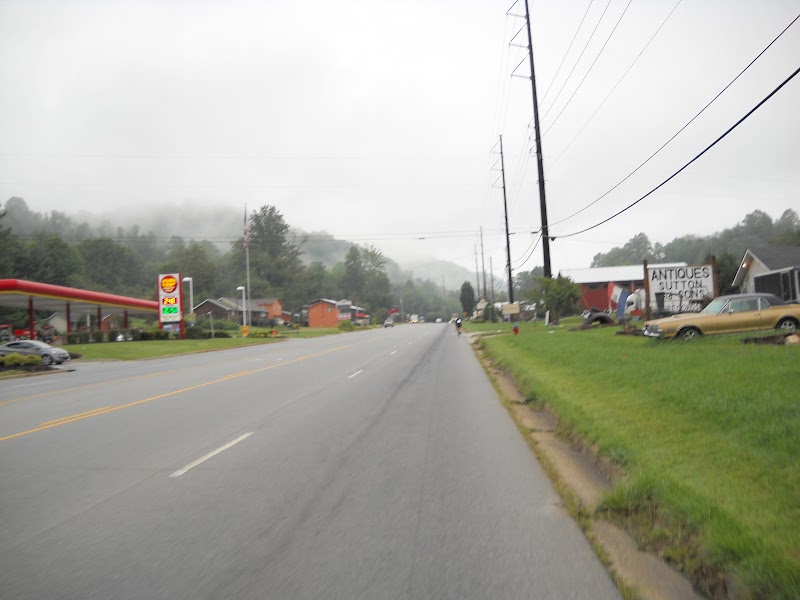 I had previously ridden about half of the BRB route, but most of the first half was new to me.

The first seven miles–along highways 19 and 276–are mostly flat.  A gentle prelude to get warmed up on. 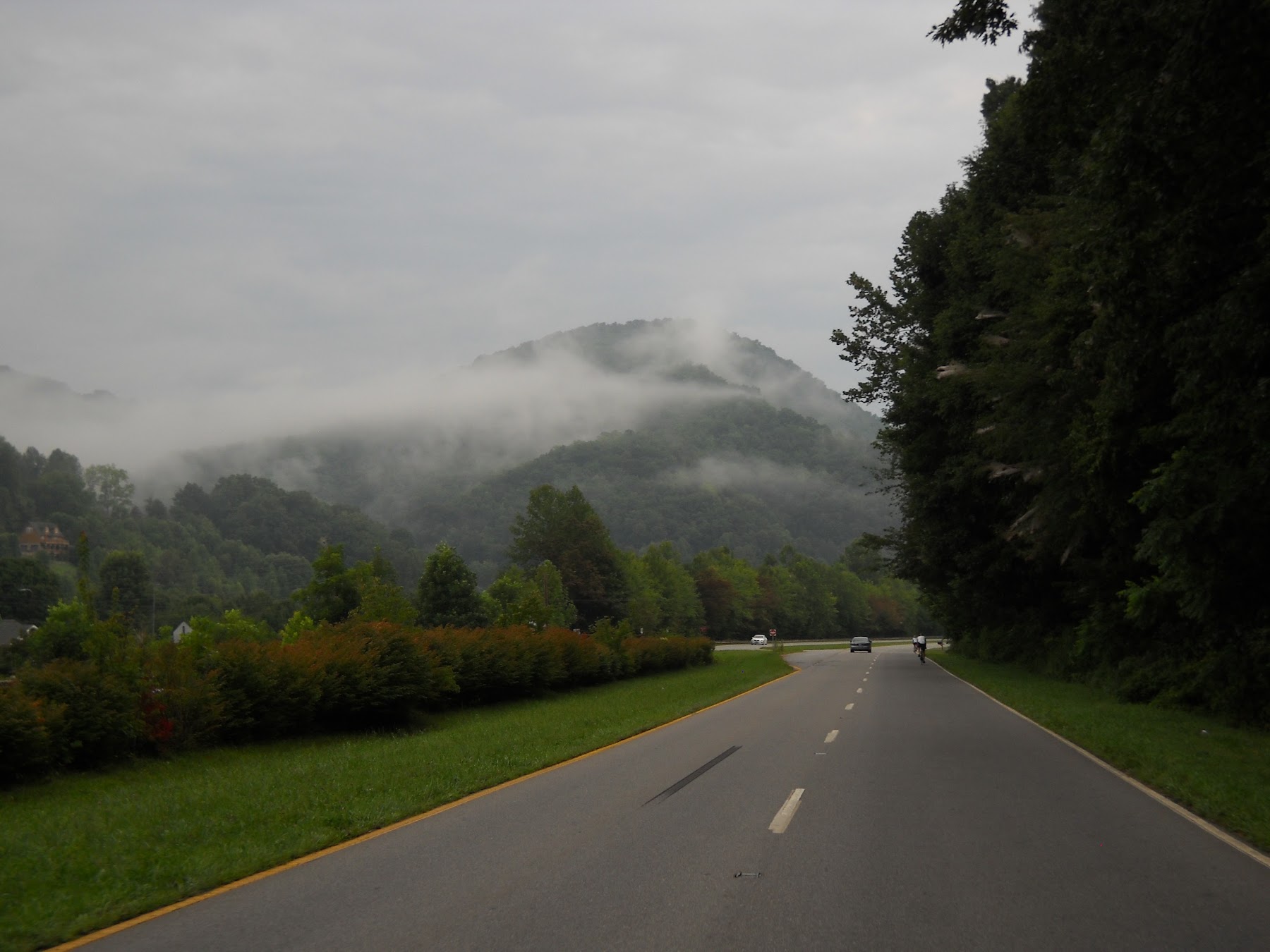 It was an overcast morning with patches of fog scenically shrouding the hills.  The weather forecast (in Knoxville) called for a lovely August day, partly sunny skies, highs in the upper 80s, with a slight chance of afternoon showers.  It didn’t turn out that way. 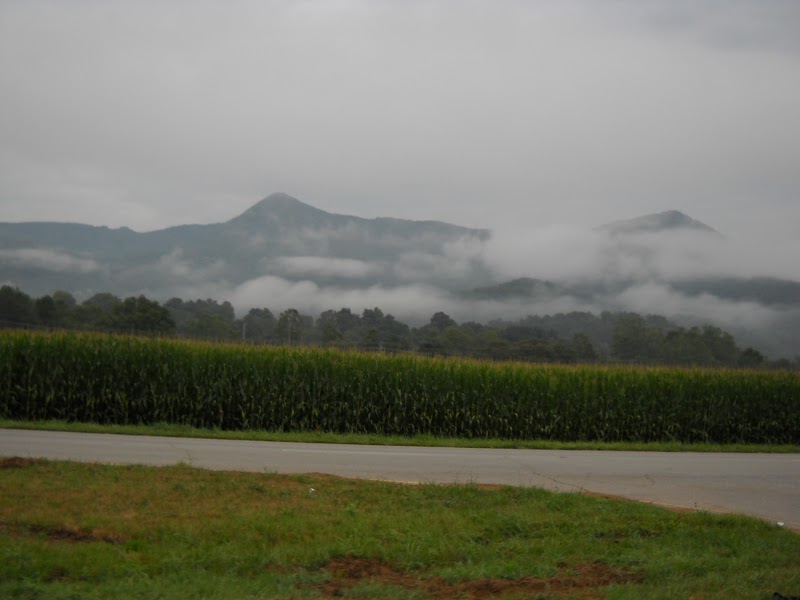 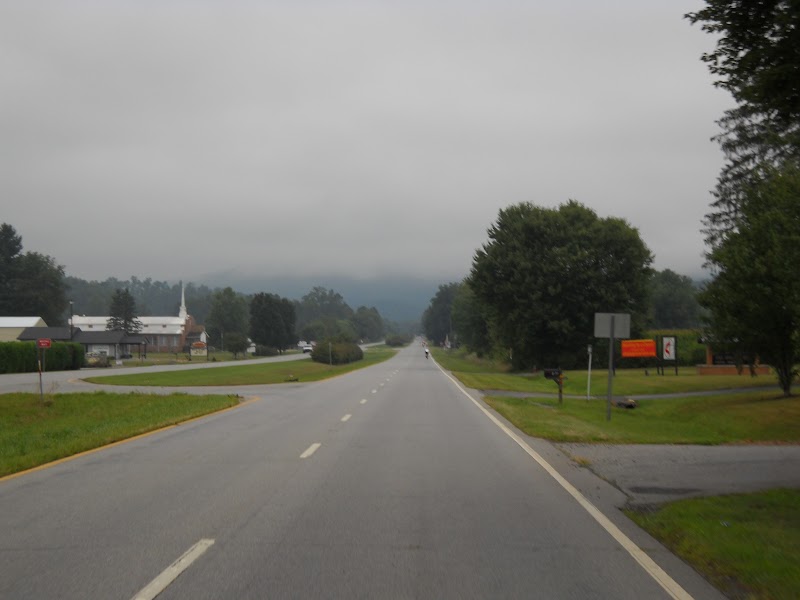 After seven miles the route departs the highway onto rural roads. 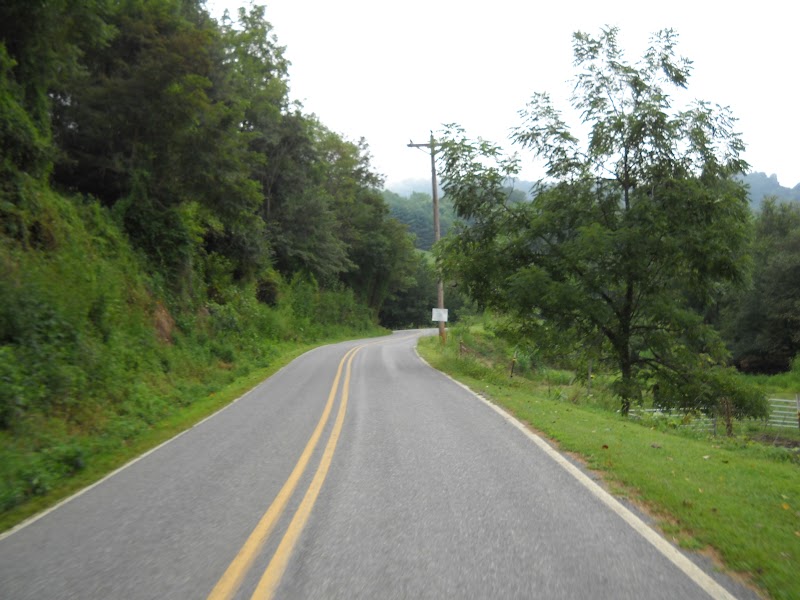 The roads wind around and over hills. 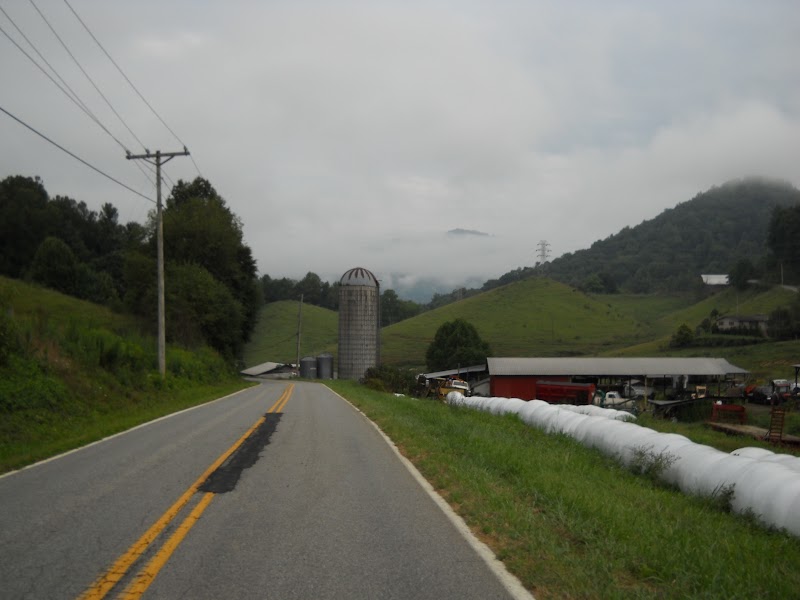 This is the roller coaster part of the ride.  The terrain and curves keep you on your toes.  No snoozing here. 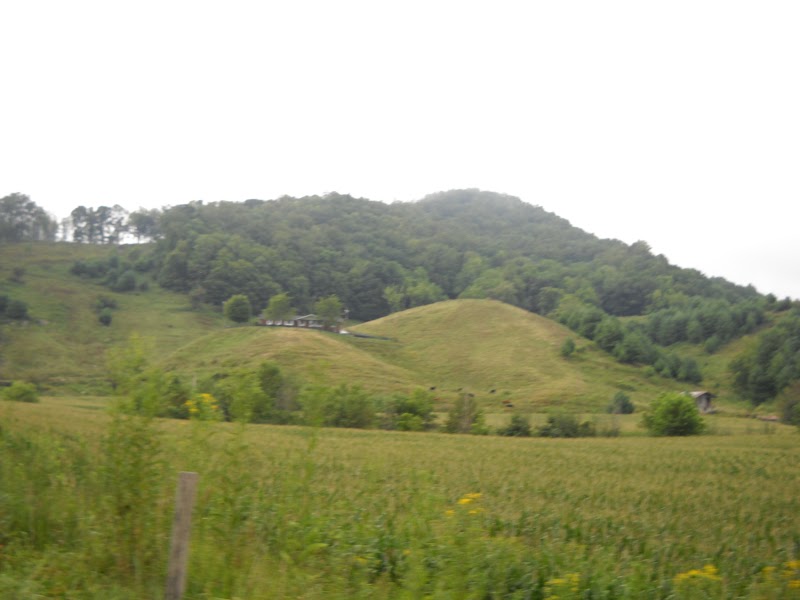 I haven’t ridden in virgin territory much in the last couple years, so it was fun discovering something new around every corner. 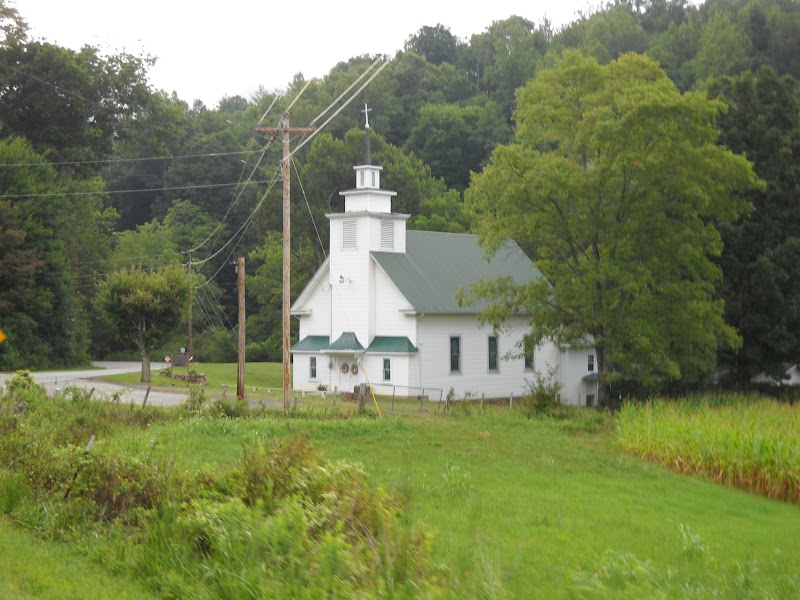 I stopped at the first rest area.  All of them, actually. 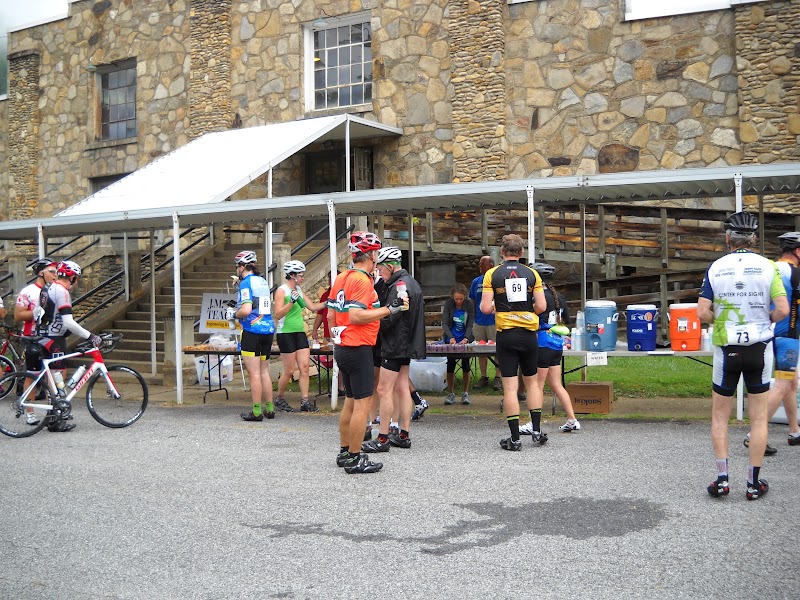 The BRB had eight stops.  That’s more than I’ve seen on any other organized ride.  So it’s well supported in that regard.  But the food selection varied–some stops were much better stocked than others.  If I ride again, I’ll know where to look for the better food.

One criticism of the event, which didn’t affect me, but I heard other riders talking about: at least two of the stops didn’t have any mechanical support.  They didn’t even have an air pump.  The staff said they could call someone in to help, but that’s unneeded hassle and delay.  A rest stop should have essential tools. 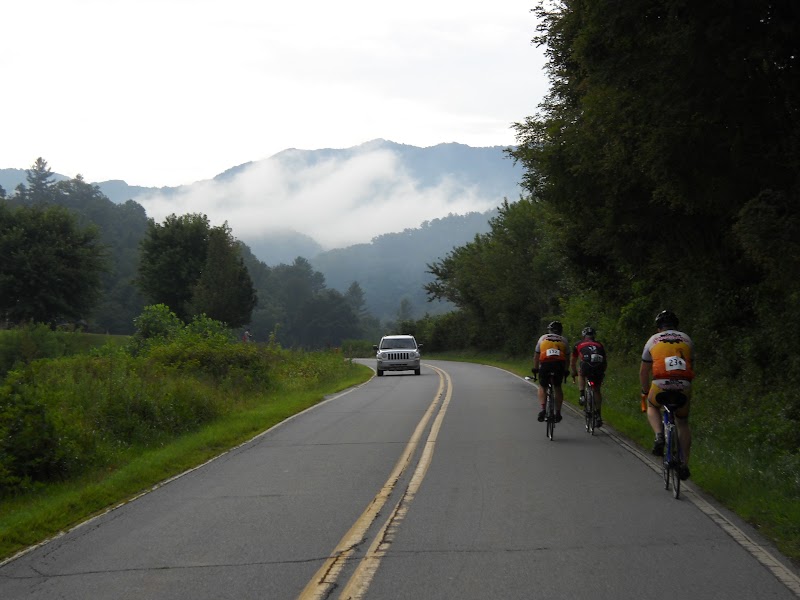 Between miles 29-44 the route has several open, flat stretches of road.  I was fascinated by the topography.  The area is surrounded by mountains, but in the valley there’s more level riding than here in Knoxville.  A few times it appeared I was heading toward a tough climb, but then the road would weave its way through an unseen opening between the hills. 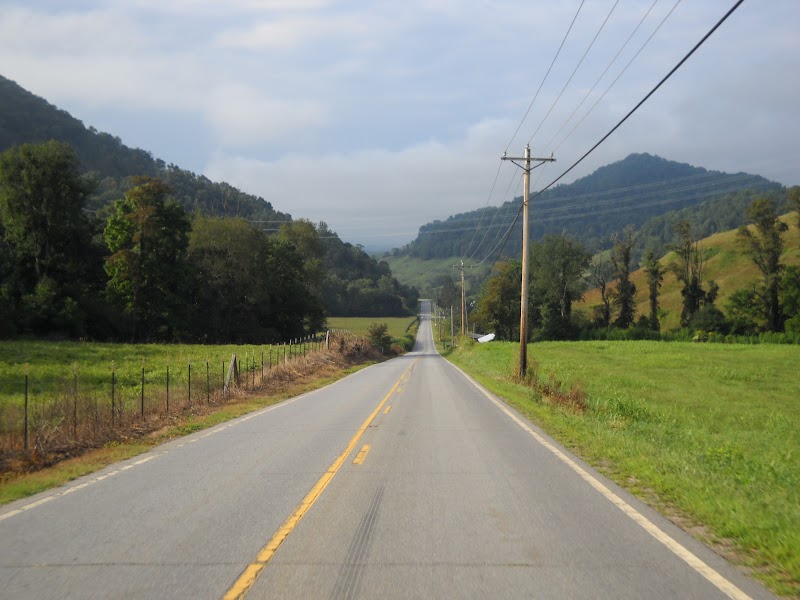 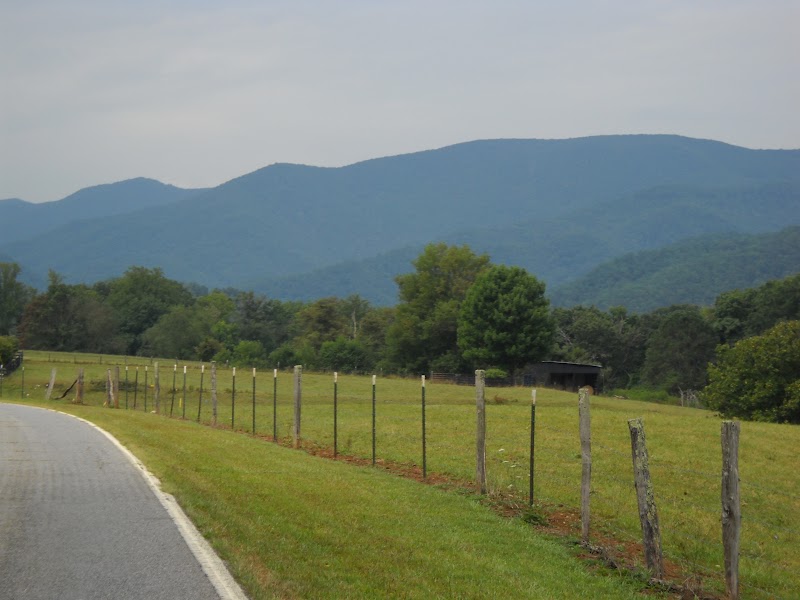 At mile 44, the route starts climbing on 215 through the forest, eventually passing by a lake. 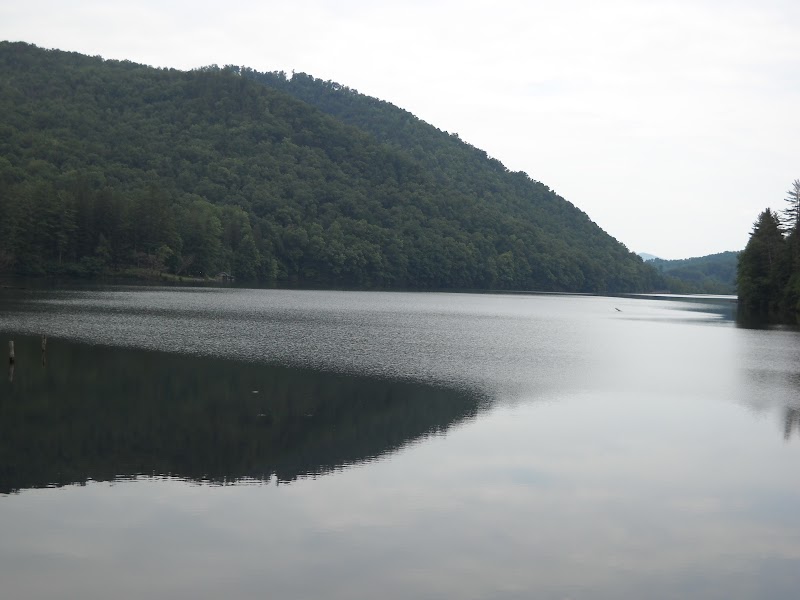 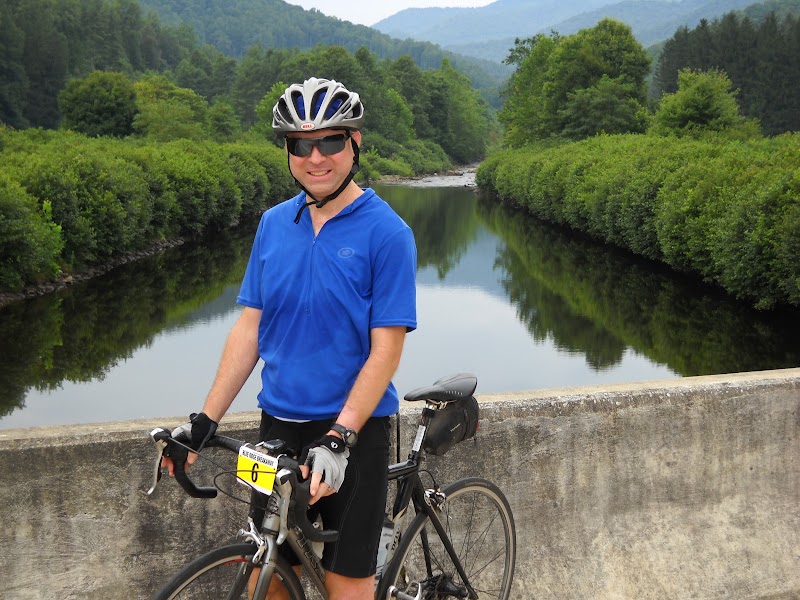 Me, posing with the view upstream from Lake Logan

After the mile 50 rest stop, there’s a continuous ten-mile ascent.  Most of it is ~5% or less, but there are some steeper pitches.  I generally climbed in the 7-9 m.p.h range. 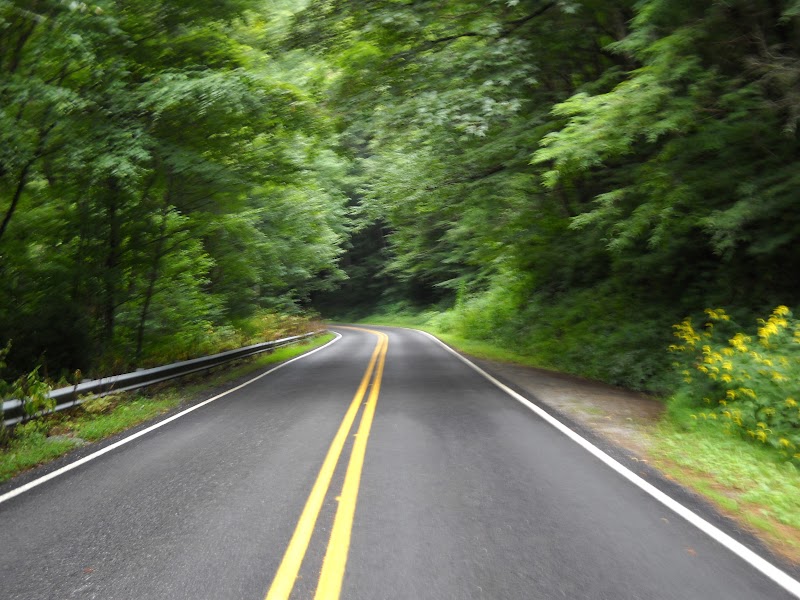 The first part is under forest canopy. 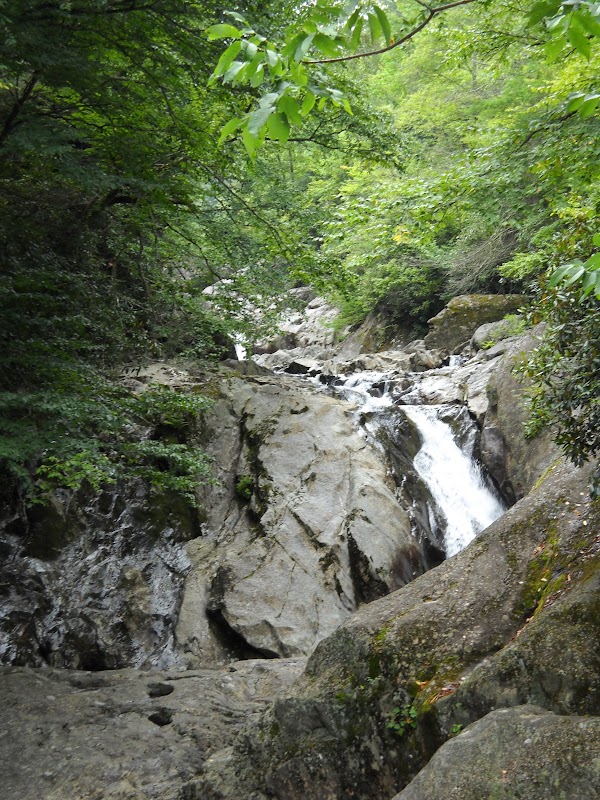 After the waterfall, the view opens up more. 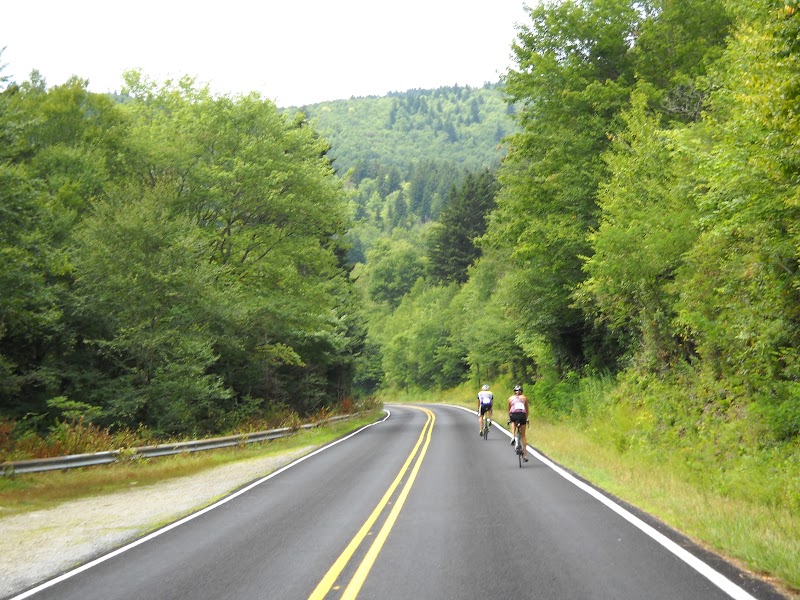 At last I reached the Blue Ridge Parkway (BRP). 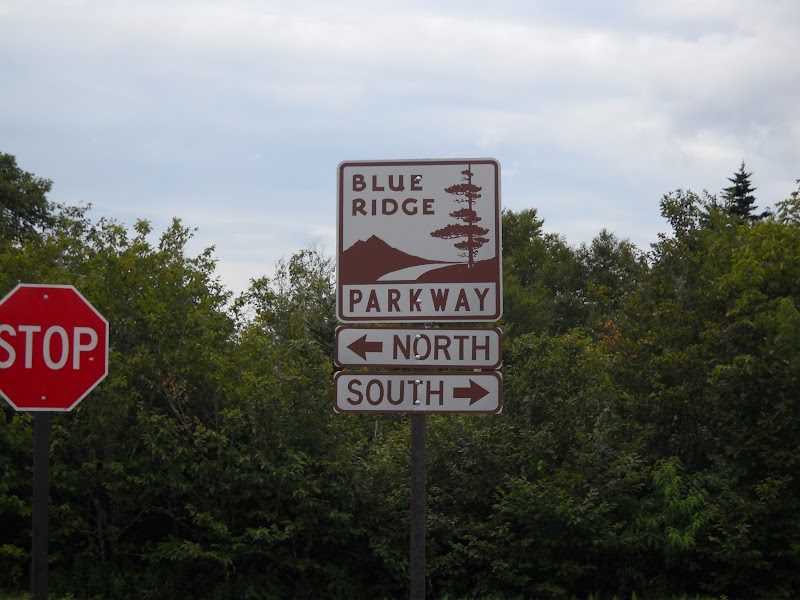 The views along this part of the BRP are spectacular.  Unfortunately, the promised sunshine never showed up during the ride.  At one stop I optimistically applied sunscreen, but it was all for naught. 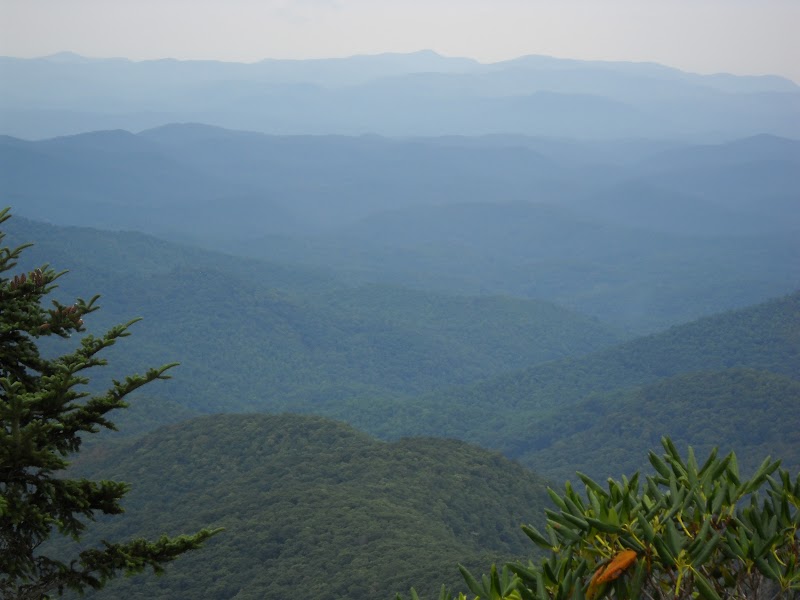 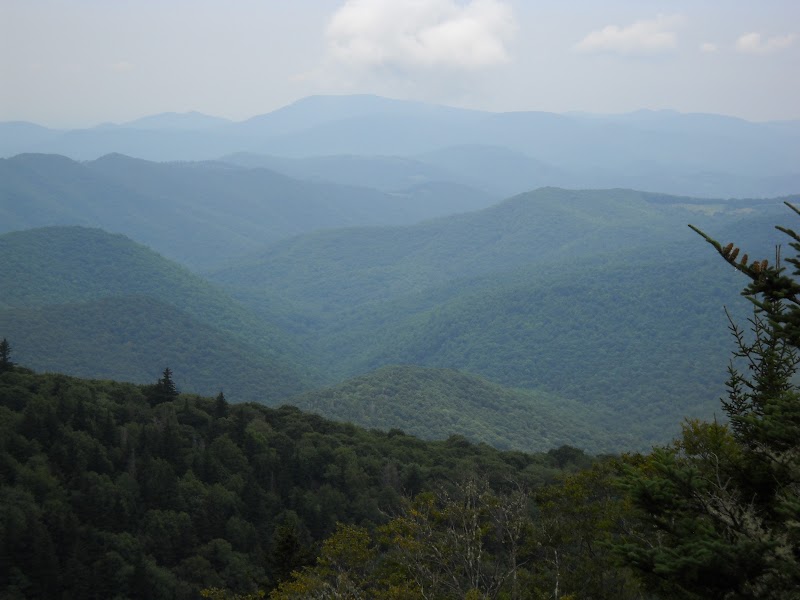 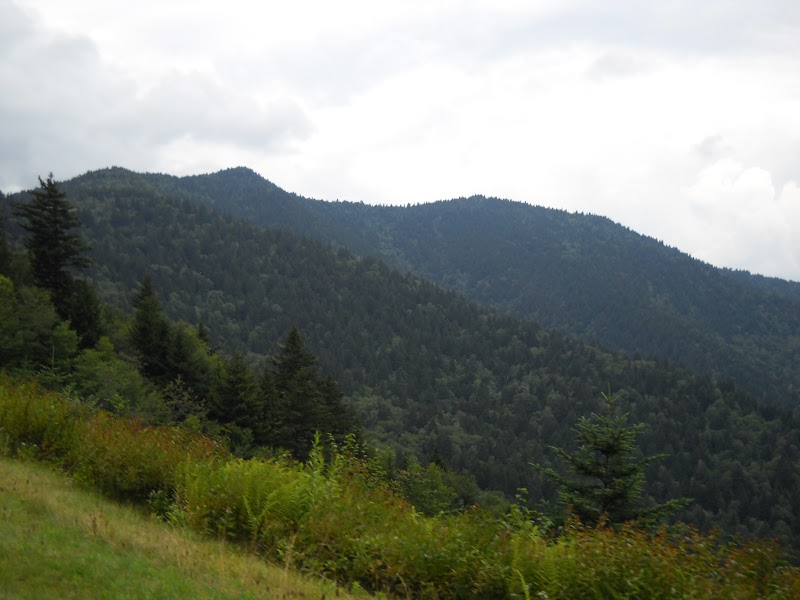 Traffic was light on the BRP, even though it was the weekend. 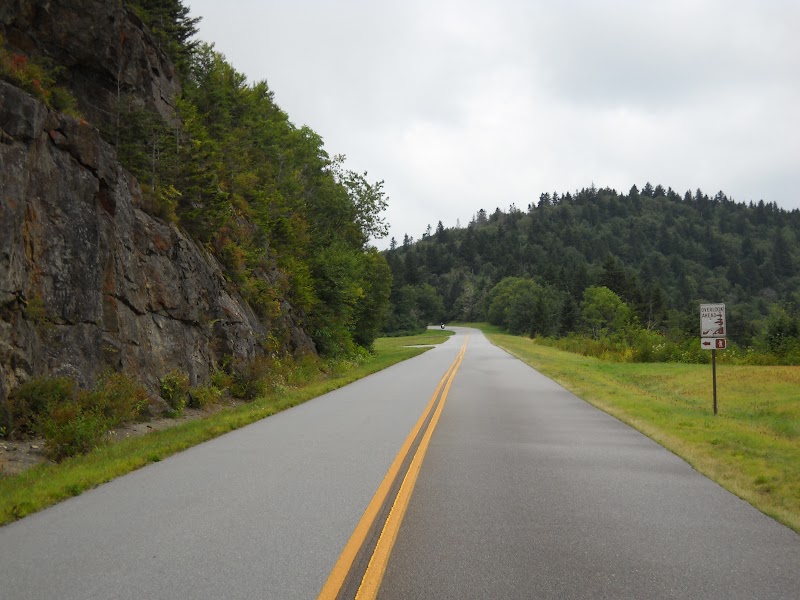 At the mile 70 rest stop I got bad news.  According to radio chatter, there was rain ahead.  Not just a shower, but a “downpour.” A stop volunteer helpfully offered a poncho, which I stuffed in my jersey pocket. 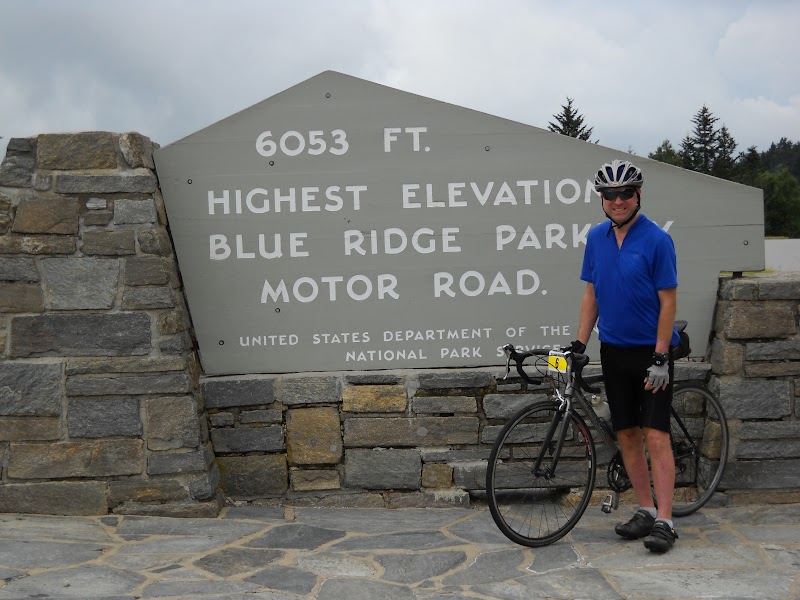 Last photo before the rain

At mile 75 it started raining and continued to do so–in varying intensity–for the remainder of the ride.  Not a downpour, but enough to get wet.  And once you, your bike, and the road are wet, you’re wet.

The next five downhill miles weren’t fun.  It was sloppy, difficult to see (wet sunglasses), the poncho/parachute made a racket, and my wet brake pads didn’t grip.  I had to apply the brakes well ahead of the curves to negotiate the road.  If something had forced me to make an abrupt stop, I would have been in trouble.

I was relieved to reach the (temporary) bottom and slow down with the day’s final climb: eight miles up to Waterrock Knob.  And it was a slow, steady 7.5-8.0 m.p.h., most of the way.

Physically, this climb, and the day in general, went well.  I didn’t set any speed records, but I was in good enough shape to comfortably complete the event without any bouts of cramping.  My knees were good–no problems with arthritic inflammation.  The latter part of the ride I had some minor discomfort in my right hip, but it was tolerable. 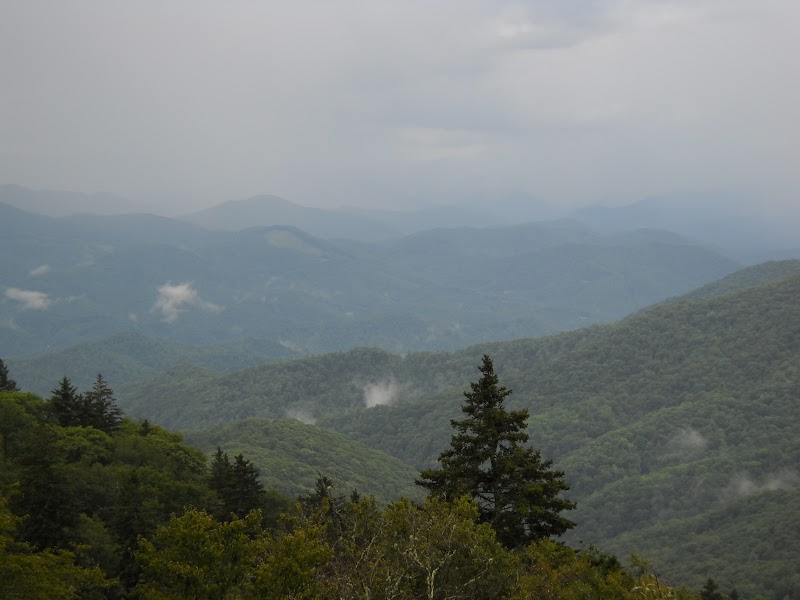 View from the mile 89 rest stop.  Heavy rain in the distance. 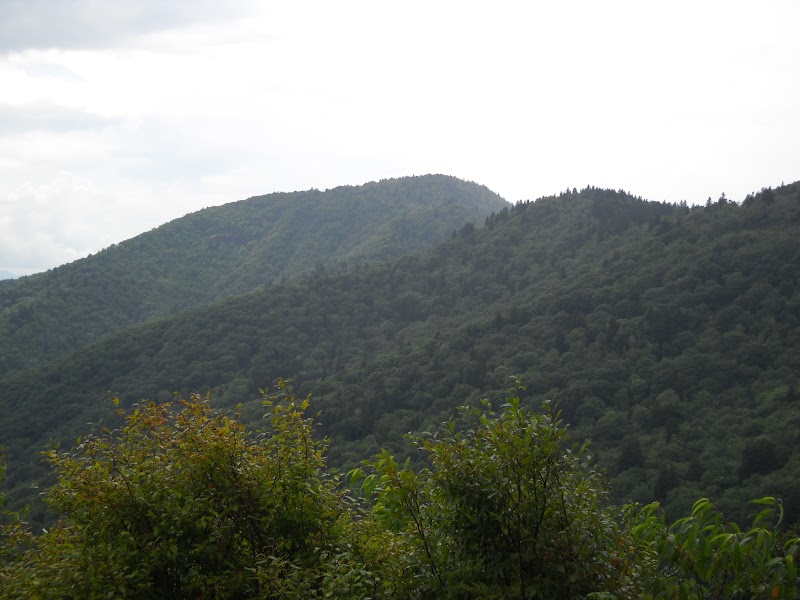 Being concerned about my braking issues, I asked a rest stop attendant about any steep descents the remainder of the route.  He told me there wasn’t anything steeper than what I’d already seen on the BRP.

Turns out, he either he didn’t understand my question, or he forgot about this part: 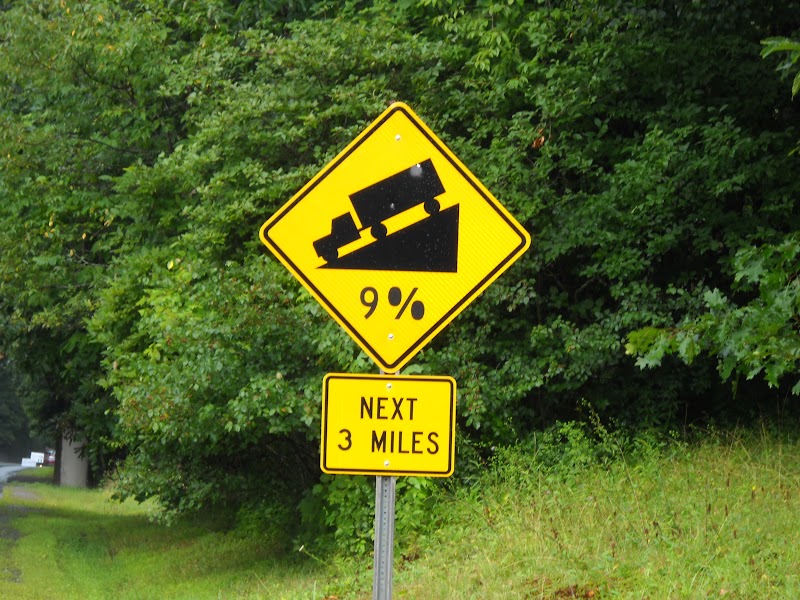 When you turn off the BRP there’s a steep decent on Highway 19 back into Maggie Valley.  To make matters worse, the road is high traffic, has only two lanes at the top (it broadens to four in Maggie Valley), and a 50 m.p.h. speed limit.

Self-preservation being my top goal, I didn’t go anywhere close to 50 m.p.h.  I kept it under 25 m.p.h. regardless of how many vehicles were backed up behind me. [There was another cyclist just ahead of me, so I didn’t feel so bad about slowing traffic.]

Frankly, this three mile descent, and the last seven miles through Maggie Valley/Lake Junaluska, were my least favorite part of the ride.  It would have been O.K. if it was dry, but the sloppy conditions, combined with the traffic, left a sour aftertaste on what had otherwise been a tranquil outing.

At any rate, I was happy to make it to the finish line without getting run over by a monster pickup truck.  Officially I completed the 105.7 mile course (9,600 feet of elevation gain) in 9:10:08. According to my computer, 7:21:42 of that was riding time–the rest was stoppage time.

I was hungry and enjoyed the post-ride meal, which included two black bean burgers, nachos, coleslaw, and sundry snacks.

After I finished the rained stopped, the sun peaked out, and it turned out to be a nice evening.  Great timing. 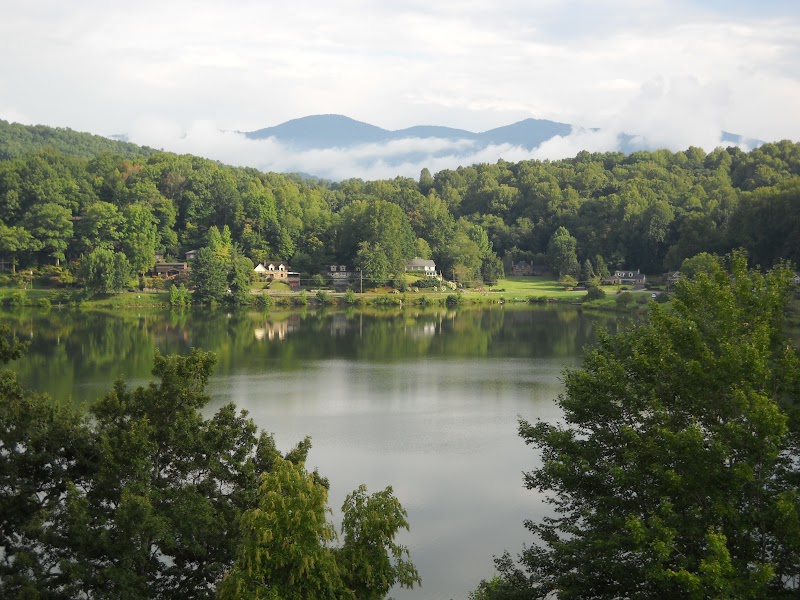 We decided to drive home the scenic route: a short stretch of the BRP, then through the Great Smoky Mountains National Park (GSMNP) to Townsend/Maryville/Knoxville.

There was a surprise awaiting just inside GSMNP.  I saw a bunch of cars lined up on both sides of 441, and then this: 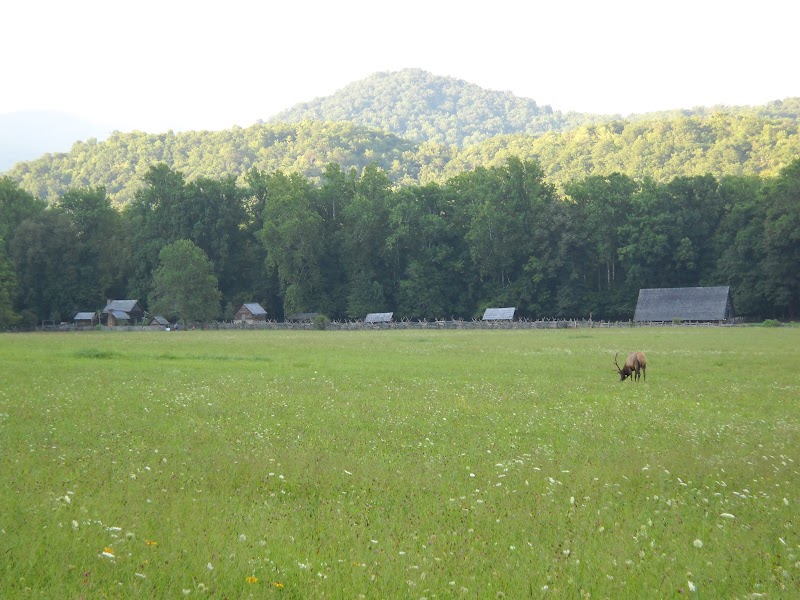 Three elk!  It’s the first time I’ve ever seen them in the Eastern United States.  One was in the field and two were wallowing in a small ditch. 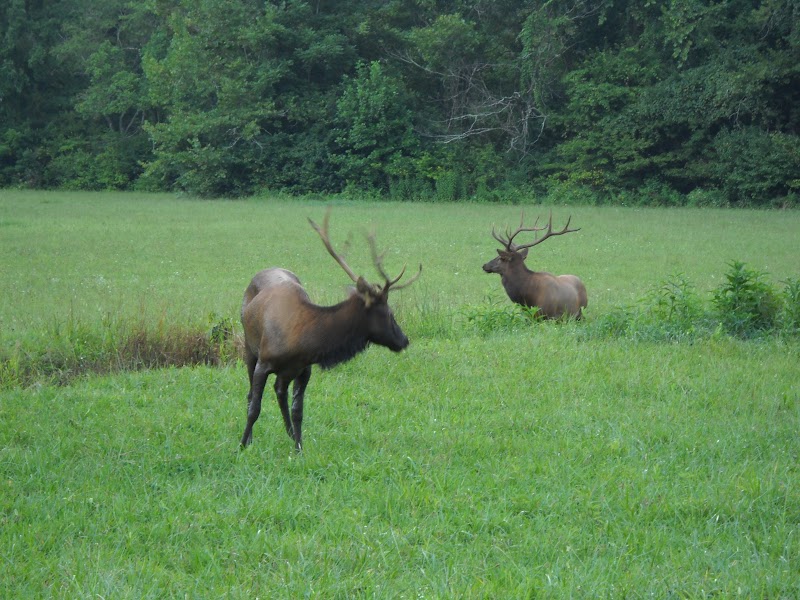 We reached Newfound Gap shortly before dusk, allowing one last look at the mountains: 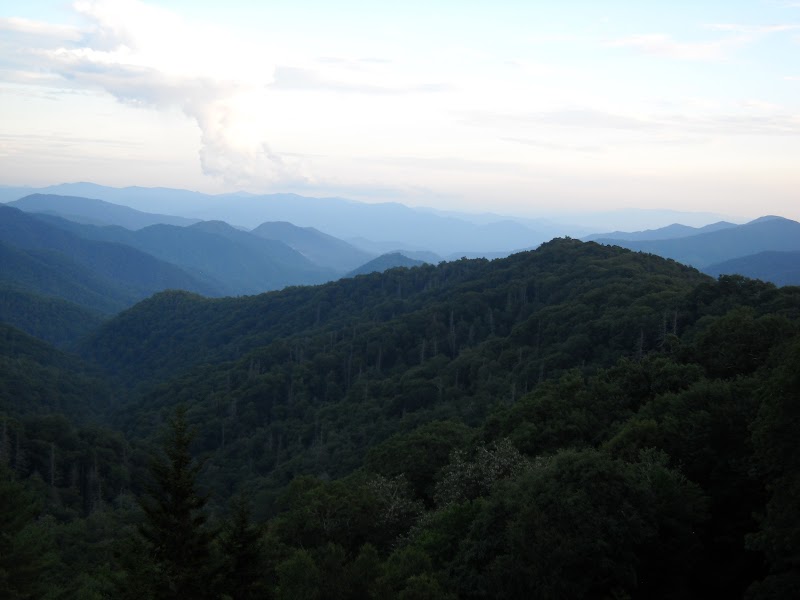 Sunset over the Southern Appalachians

Although tiring, I enjoyed this full day.  Two thumbs up for the Blue Ridge Breakaway.  The scenery is terrific and the support is good.  I hope to do it again next year.