This is another post on my chronic health issue, psoriatic arthritis.

Over two years ago, after joint inflammation had mysteriously taken over my body, a new nuisance emerged: itching.

Large areas of my torso itched, and I didn’t know why. Was it a side effect of the drugs I was taking? My skin reacting to soap? Landry detergent? A new cat allergy? I couldn’t figure it out.

Eventually I stopped trying, coming to believe that it was part of my then newly-diagnosed condition–psoriatic arthritis.

Over the following months I developed a rash that came to encompass nearly half my skin: around my neck, under one of my arms, on one of my wrists/hands, across a large section of my abdomen and back, my crotch/buttocks, and a majority of my legs. It had a reddish hue and was mostly smooth, but in some areas there were bumps, too.

Some days I didn’t think about my skin, other days it was annoying.  At times I would awake at night scratching.  Sometimes I picked at my skin so much it started bleeding.

My rheumatologist, who said he dabbled in psoriatic arthritis skin treatment, opined that it looked like psoriasis, though not conclusively.  First he gave me nystatin to treat it.  Three months later he switched the prescription to fluocinonide. These cremes temporarily relieved some of the itch, but they didn’t reduce the underlying rash.

My ailment reached its peak this fall when my left thumbnail slowly died. Most of it came off a couple weeks ago. 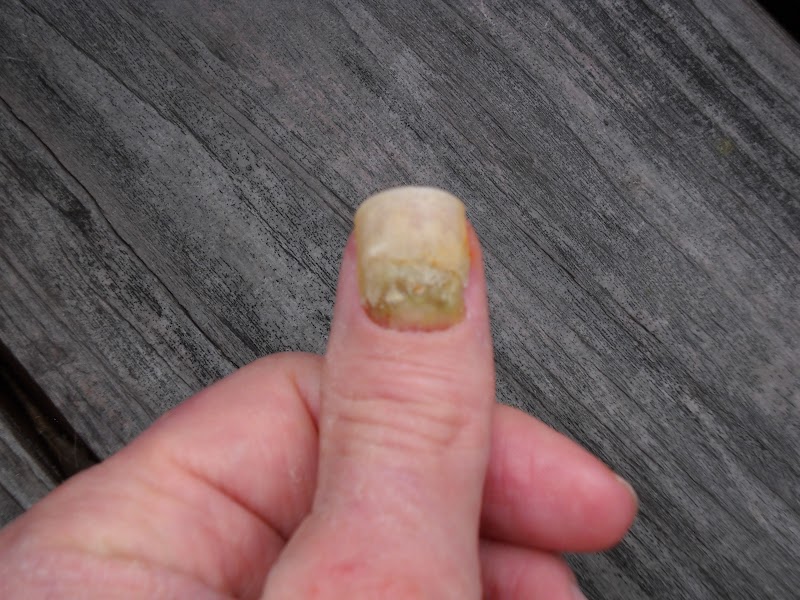 Finally, I had enough, and reluctantly scheduled my first-ever appointment with a dermatologist (I hate seeing doctors). On the appointed day I went to be examined by a practitioner named Rash–no joke.

Ms. Rash looked me over for a couple minutes, then summoned an M.D. for a “what do you make of this?” second opinion. After taking a few skin “scrapping” samples to the back for enhanced examination, they tentatively concluded that my skin spots are not psoriasis but rather ringworm. Which is not caused by worms, but by a fungus. I’m covered with fungi, presumably.

If true, this is good news because a fungal infection is much more treatable. The dermatologist gave me a three-week course of terbinafine. After a few days I’ve seen a color change in some of the spots, consistent with this diagnosis. The skin has developed a white, powdery texture–as if I has been radiated, or maybe a fungus is dying.

I hope this ailment continues to clear up.  It would be nice to have normal skin again.

Lesson Learned: Sometimes it’s best not to make uninformed conclusions about a problem.  You may need an expert to evaluate it.