Last week I drove to Tellico Plains, TN, to bicycle to the top of the Cherohala Skyway and enjoy the fall colors. 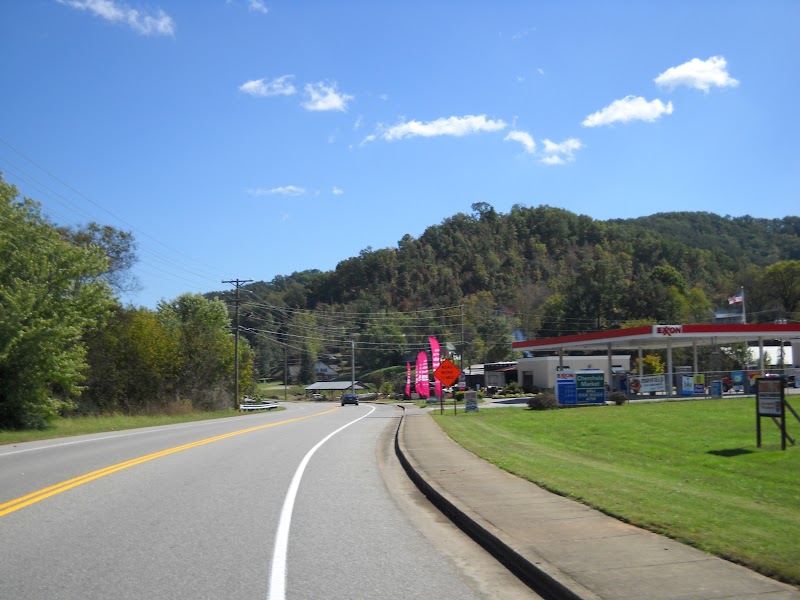 It was as nice an afternoon as I could expect in mid-October.  The temperature was 72F when I embarked at 2:00 p.m. 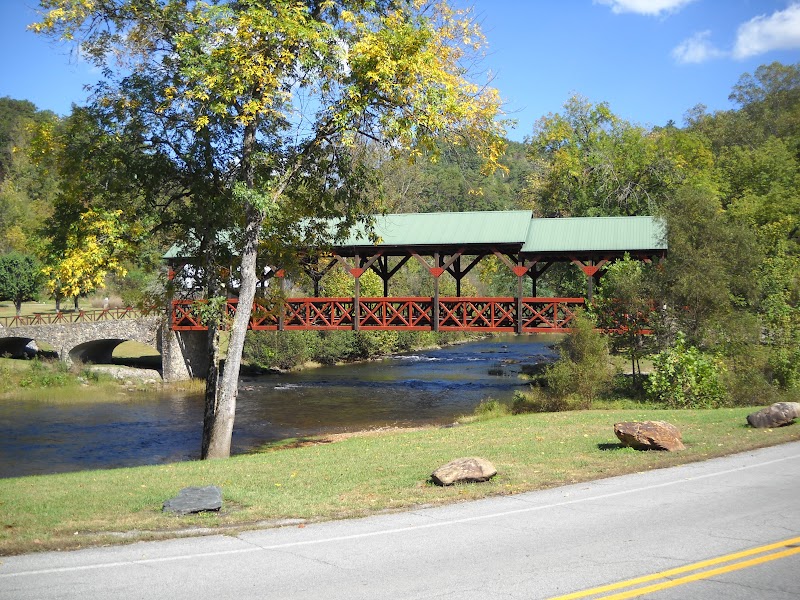 There was some traffic the first five miles along the Tellico River, less so the next six miles to Indian Boundary, and not much beyond that. 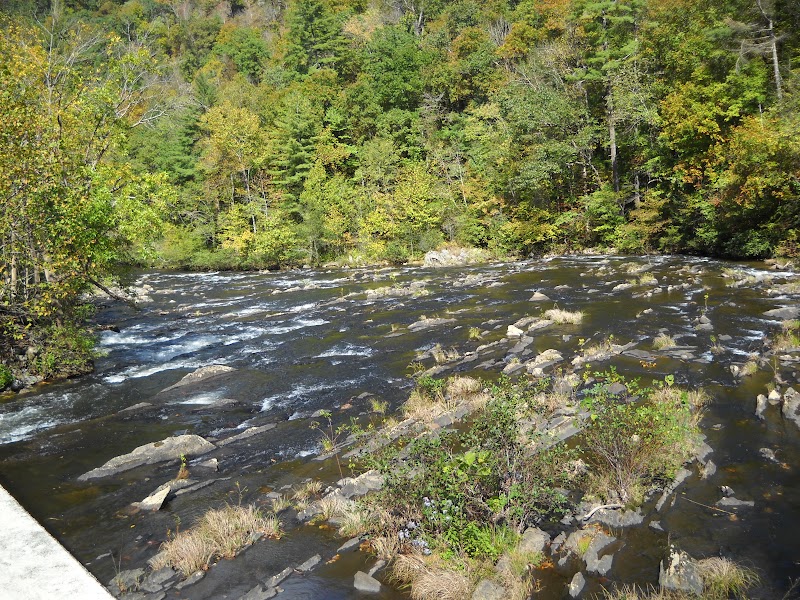 It’s easy pedaling along the river. 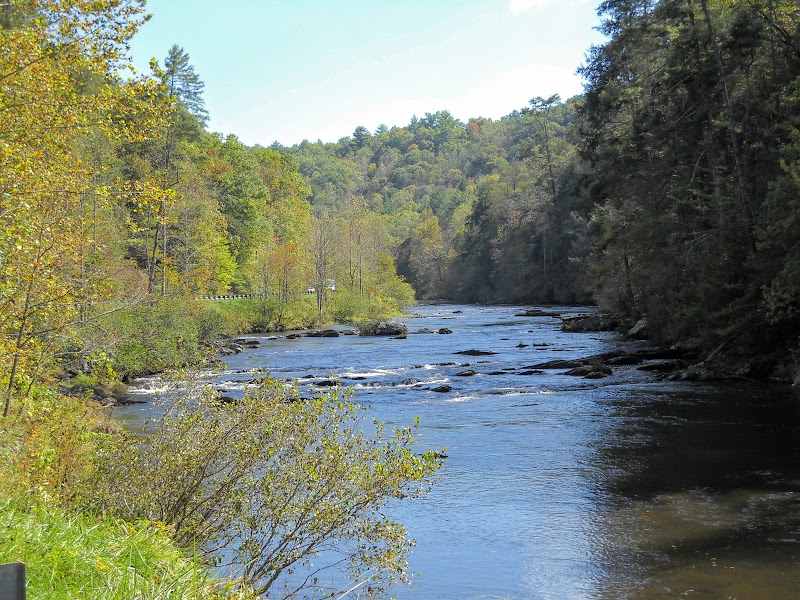 Thereafter, there’s a tough mile to the first overlook, then it’s rolling (but generally uphill) for the next five miles. 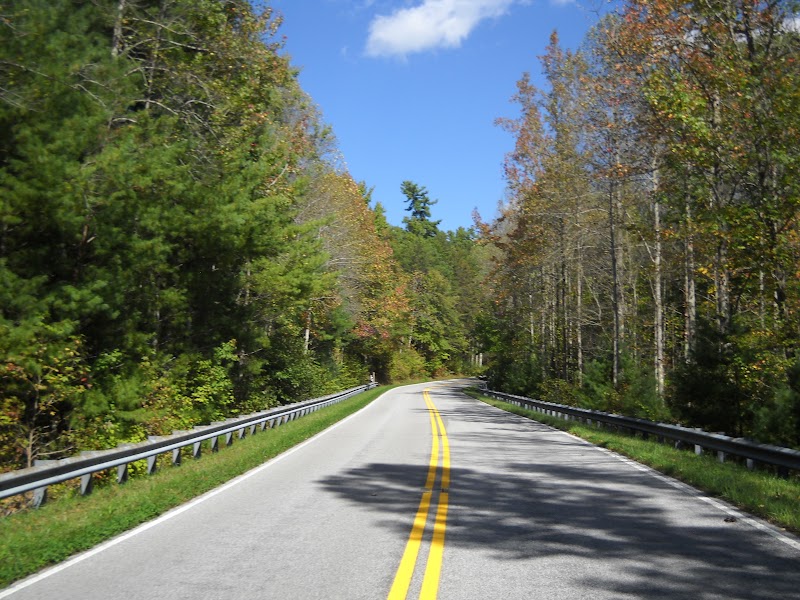 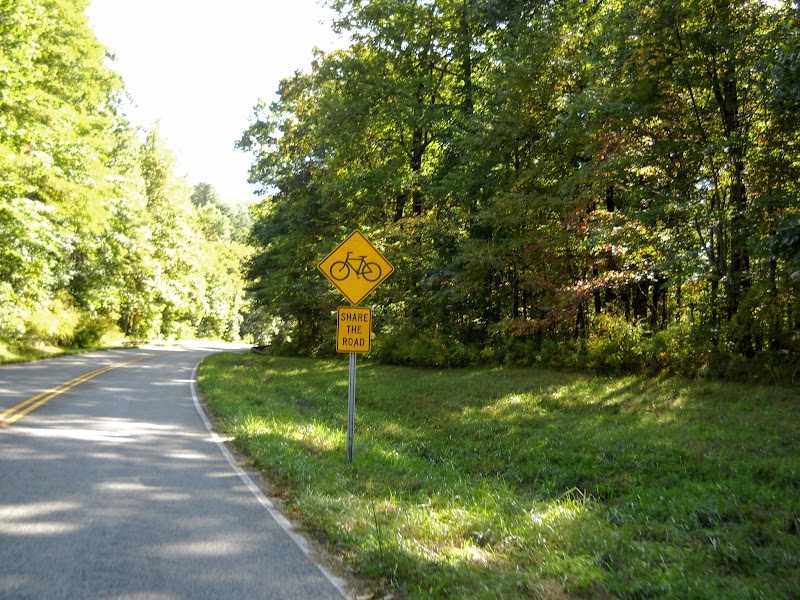 The serious climbing begins 11 miles into the Skyway. 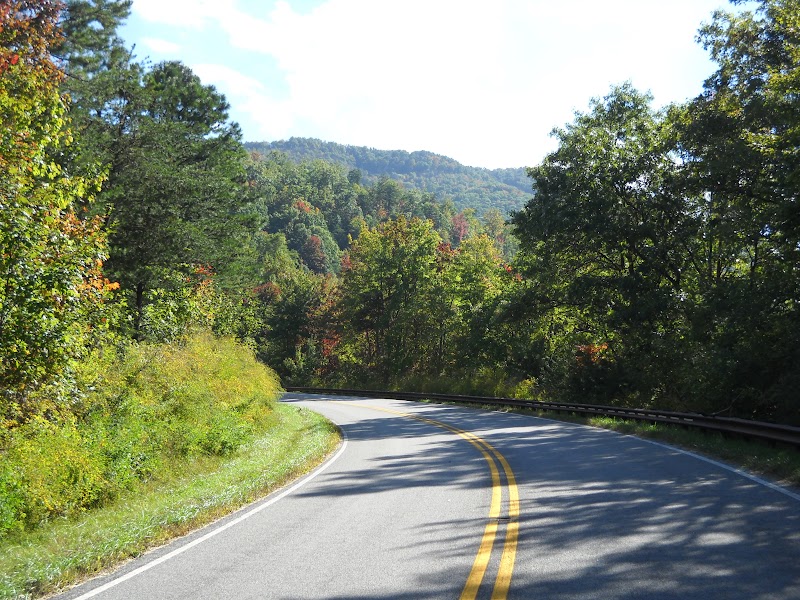 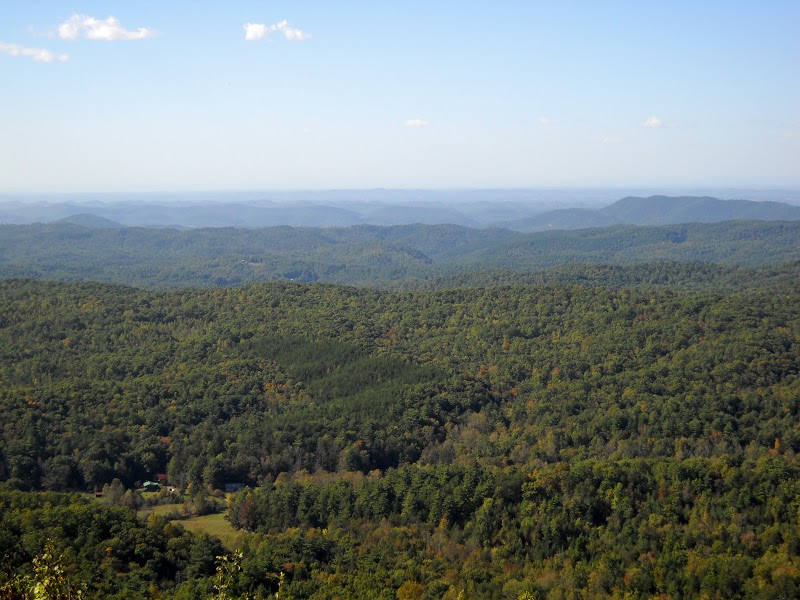 I last did this ride five years ago.  Back then I reached the highlands after the leaves had peaked; this time I arrived before maximum color.  So it goes. 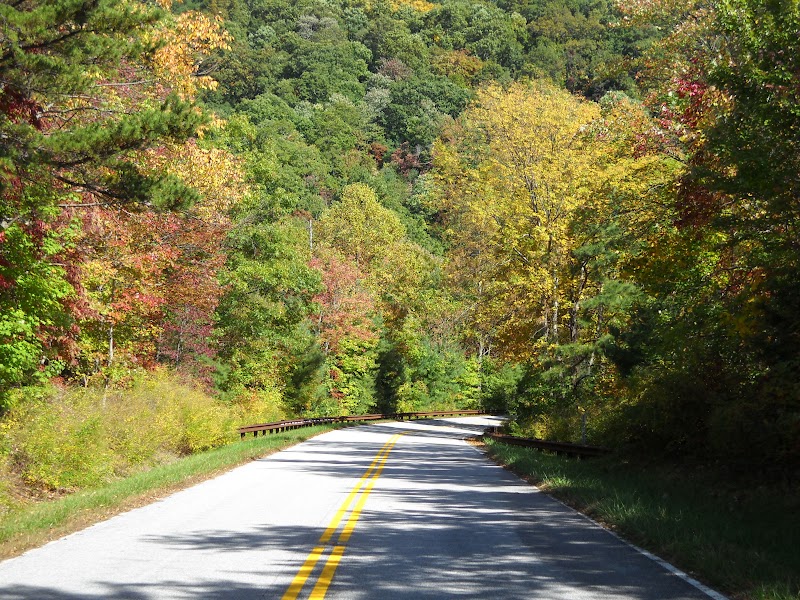 Common status during the long, slow (6-7 m.p.h) slogs: standing on and mashing the pedals, eyes focused slightly ahead of the front wheel, attempting to keep audible grunts/groans to a minimum, with a song repeating incessantly in my head. 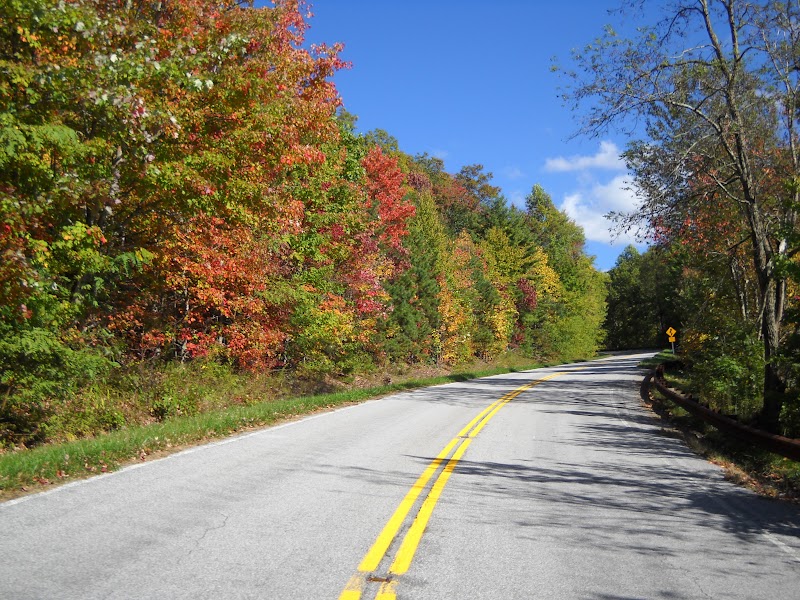 The most vivid colors were red dogwoods and and other assorted red trees. 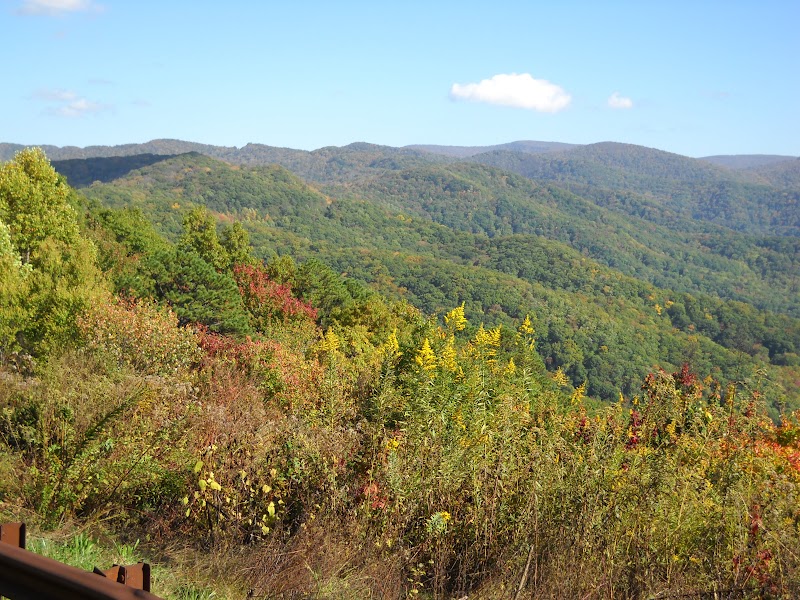 Conquering this road is a vastly different cycling experience than my typical rides.  There are rolling hills around Knoxville, but nothing strenuous like this.  It’s a tough climb–more so than going up the North Carolina side, I think.

Just as notable is the solitude.  No shopping centers, gas stations, or traffic lights.  Not even a visitor center.  Just a strip of pavement through the forest, with an occasional passing vehicle.

The aloneness with nature is a powerful experience. 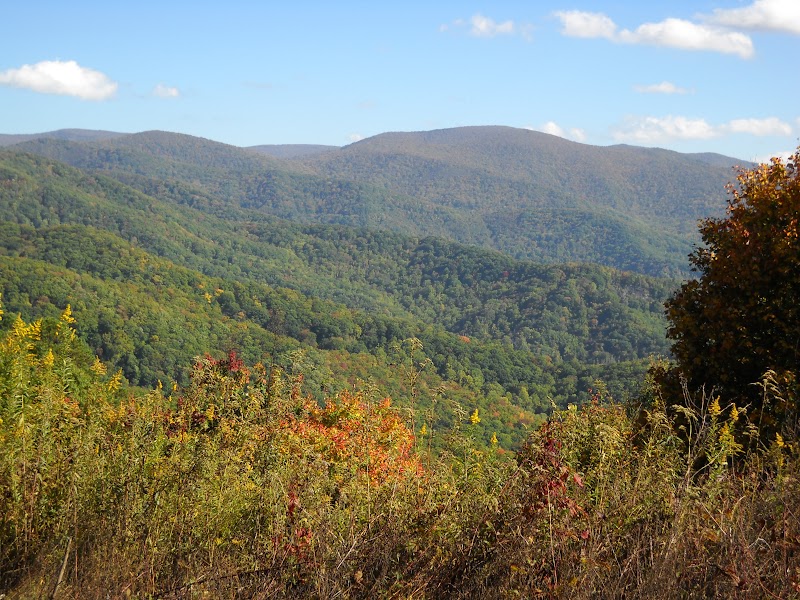 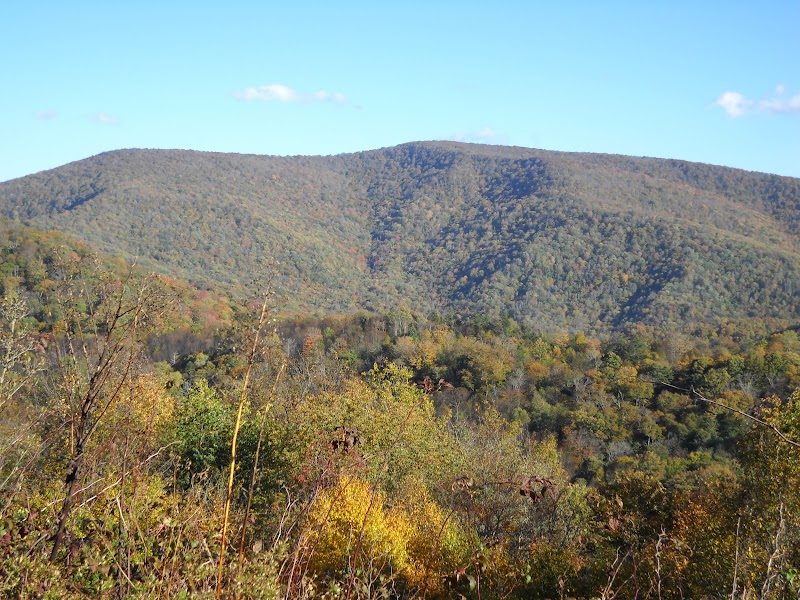 I ran into issues when I got above 4,000 feet, near the North Carolina border.  By this time (~5:00 p.m.) shadows were extending on the east side of the ridge.  It was also breezy up there.  I got chilly, even while laboring uphill.

Moreover, I inadequately fueled myself.  All I brought was a granola bar and an apple.  That’s not enough to eat; I was hungry and running low on energy.

Finally, daylight was becoming an issue.  I had planned to be at the top at 5:00 p.m., but I was 20-30 minutes behind schedule.  I knew if I went all the way to the top I would be pushing it to get back before dark.

So four miles into North Carolina, 3.5 miles shy of the summit, I decided to turn around and head back.  I was bothered (still am) that after an afternoon of driving and climbing, I quit just short of my goal.  On the other hand, the prospect of freezing/cramping/bonking miles from civilization, with no support, was not a good thought.  Better safe than sorry.

Fortunately, none of my doom scenarios played out.  I warmed up once I got back in the sun.  I had enough gas in the tank to overcome the three returning hill climbs.  And no cramping. I enjoyed one more hour amid ridges, lit by lengthening evening rays.  I got back to my car a few minutes before sunset.

I didn’t see any wildlife during the ride, other than birds and squirrels.  But I did spot these cute bears in the Tellico Plains visitor’s center. 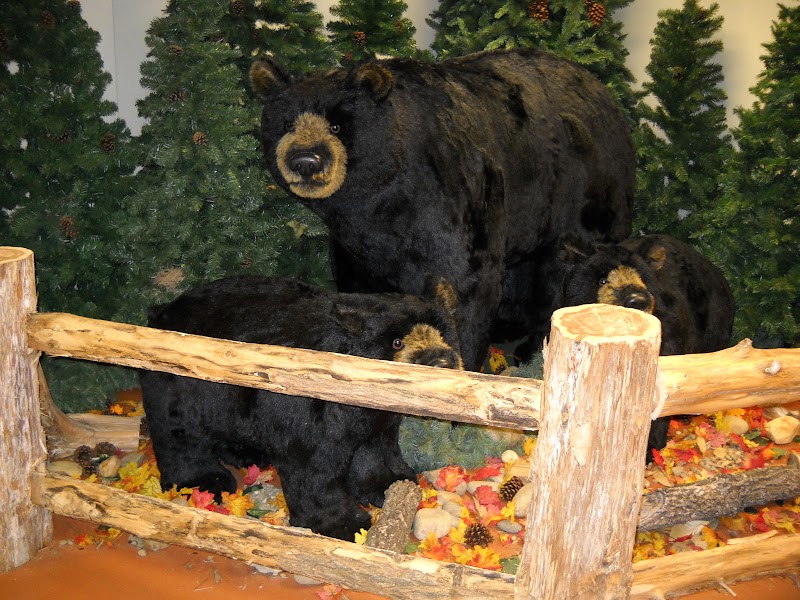